Deep Space Musical | On the Shoulders of Giants

Deep Space Musical has received the following awards and nominations. Way to go!

Deep Space Musical: A Musical of our Universe by converting Iconic Hubble Images into Sound (so even visually impaired can enjoy beauty of our Universe)

We created a Musical of our Universe - from Birth of Stars, to Galaxies of Stars, to Death of Stars by converting 3 Iconic Hubble Telescope Images: the Pillars of Creation, the Hubble Ultra Deep Field and the Supernova 1987A into sound using Python Program 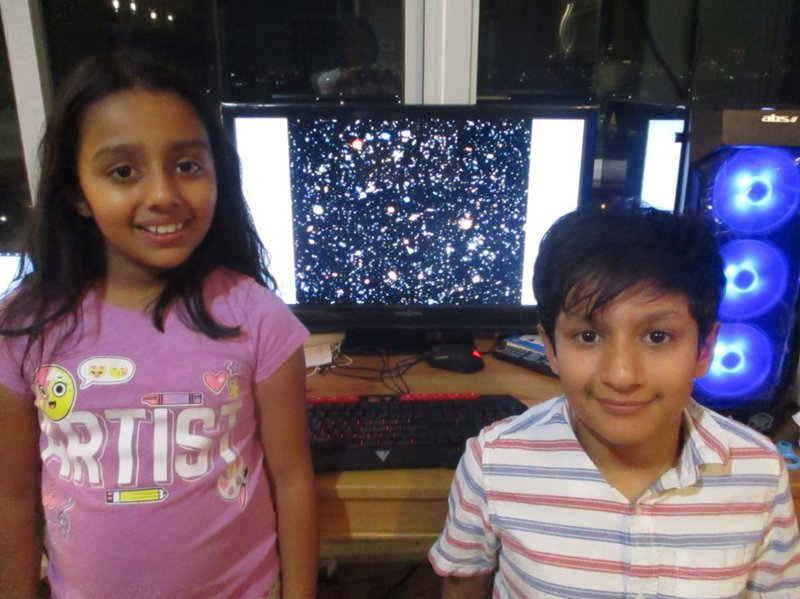 • Transforms images taken by the Hubble Space Telescope into sound to create a Musical of our Universe.

• Allows beauty of the Universe to be experienced by everyone, including those who are blind or visually impaired.

2. Pooled the Gray Scale values (by taking the mean and maximum values of 2 x 2 matrix of the entire image) using Python Programming. This captured the key features of the image.

3. Transformed these values into frequencies and played the notes associated with these frequencies to create the Musical of our Universe.

Musical of our Universe:

The musical has 3 parts, each built using an Iconic Hubble Telescope Image.

The Pillars of Creation is one of the most iconic images by the Hubble Telescope. It constitutes of towering columns of dust and gas in the M16 or the Eagle Nebula. These are the active star-forming regions or star nurseries where new stars are born. The pillars are bathed in the scorching ultraviolet light from a cluster of young stars located just outside the frame.

As the image constitutes few spaced out bright stars surround by dust and gas cloud of relatively uniform and lower luminosity, the music generated by the image is relatively softer and calmer with few sharper notes.

The Hubble Ultra Deep Field is the deepest portrait we have of the visible universe. Every object in the image (except for few with diffraction spikes that are foreground stars) is a galaxy which are evenly spread out. Some of these emitted the light we now see when the Universe was 400 million to 600 million years old – around 13 billion years ago. These were some of the first galaxies to emerge, shortly after the Big Bang when the first stars reheated the cold, dim universe. For very distant objects, their light is redshifted so far, they can only be seen in infrared light.

As the image constitutes of high density of bright objects (galaxies) against a dark background the musical notes rise sharply, and more frequently. This signifies an active and expanding universe. The rise of musical notes and their time period is dependent on the brightness of the galaxies and their dimensions. Brighter and bigger galaxies will produce a sharper note.

The violent death of a star is called a supernova. SN 1987A was the brightest exploding star seen in 400 years when astronomers spotted it on Feb. 23, 1987. The star actually exploded about 160,000 years ago, but it has taken that long for its light to reach Earth. The elongated and expanding object in the middle is debris from the supernova blast. A shock wave unleashed during a stellar explosion has been racing toward a ring of matter encircling the blast site. As the blast wave slams into the ring, it compresses and heats the gas, and making it glow, creating dozens of “hot spots”.

The image has several bright spots of large dimensions which creates very high pitched sound – the wails of a star nearing its end. The elliptical bright spot in the center (remnants of the star which exploded) produces its own signature sound. The music rises till it reaches the crescendo of the rings. The dark background between the ring and the exploding star provides the silences between the sounds.

The entire programming of this application was done in Python.