TeamGrit has received the following awards and nominations. Way to go!

If you talk to an old farmer or hiker you will discover they will tell you things have changed. We want to help you understand those changes as well. We are building a simplification of Earth Map data to see the effect on where you live. 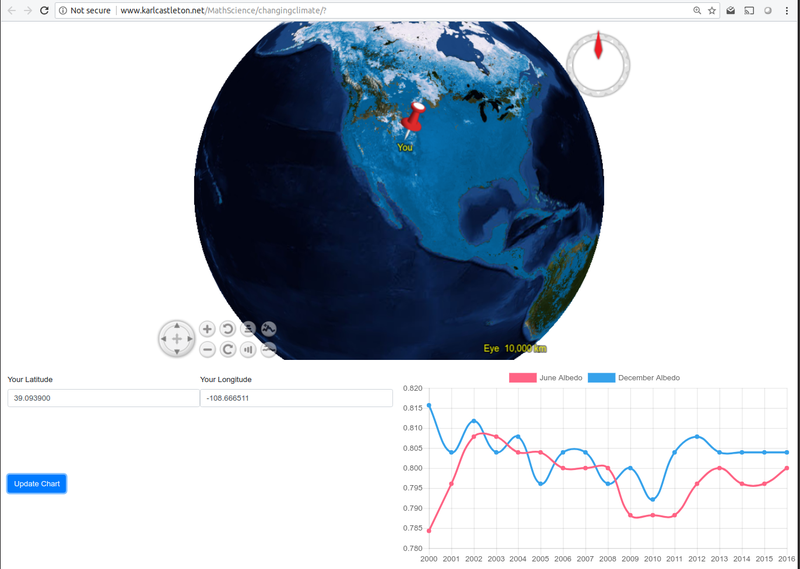 In our lifetime the planet has changed. Speaking to older people they will describe sledding in places that no longer get snow. Where we live my kids and used to sled on a hill near our house. That has not been possible in the last few years. The question "Is it likely to occur ever again?" is what we intent to answer for every datapoint collected in NASA datasets. Seeing the trendline of snow-cover may be revealing.

We were able to build a MVP that contains the albedo data for June and December for the years 2000-20016 for all Latitudes and Longitudes with .1 degree. The application is available here. It is completely implemented in client side Javascript so most code is contained in the SpaceAppsClimate.js that can be viewed as part of the page source. Also a JSFiddle was made of the working code, but it did not seem to function through JSFiddle.

We built a web application that is mobile-first responsive design and uses:

Many other layers at NASA Earth Observations could be used, land temperature over time would be interesting as well, in the same tool. We chose Albedo because it is something people see and being different when the snow line does not come down as far as it used to on average.

We felt that discussing average sea temperature, while it is likely the most accurate average measure of climate change that showing people how things have changed where they live and in ways they care about.

There were some items we came across that we would like to address in the future:

The presentation is available here