Inferno has received the following awards and nominations. Way to go! 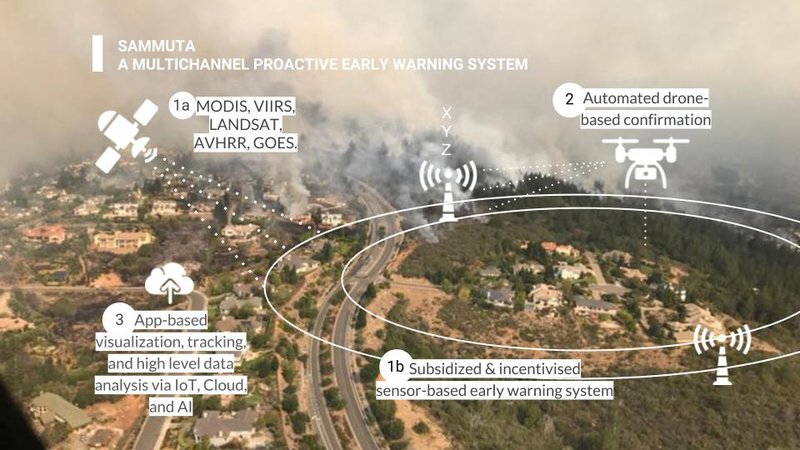 Wildfires regularly endanger both our lives and our ecosystem, our team has developed an idea to reduce this damage.

We propose state subsidized kits of wireless sensors collecting telemetric data in real time and sending it to our cloud based IoT application via network of solar powered routers and Wi-Fi amplifiers, once the conditions on wildfire are met, our preconfigured autonomous drones with resident AI module, would be activated and survey the area for fires, AI module on board is capable of discerning wildfire from normal conditions.

On the onset of wildfires, authorities would then be contacted by our on cloud application with GPS information of the affected sensors along with other weather conditions that could predict the path of fire, allowing authorities to take corrective steps to neutralize it.

We are losing the fight against forest and wildland fires. Here’s why:

Current Interventions need to be augmented:

Unfortunately, most wildfires aren’t easily preventable. Although most wildfires are initiated by either human carelessness or arson, some of the most severe are the result of lightning and power line interference. To significantly mitigate the risk and cost of wildfires, they must be detected and suppressed prior to reaching an uncontrollable state. In other words, the faster a wildfire is suppressed, the lower the cost.

Current wildfire suppression approaches often hinge on trying to predict where the fires are most likely to occur and “pre-staging” interdiction resources accordingly. But even when these activities are paired with important fire prevention aspects of public education, fuel load control and eliminating ignition sources during high-risk periods, the need for rapid detection and suppression is still one of the most important tools for containing wildfire damage. This typically means:

Although it’s certainly possible to gain this knowledge from a variety of “manual” sources, the first few minutes of fire inception are the most important, because they will determine fire deployment strategy.

We want to have a system in place that will automate most of the things that cause longest response time. Here is how we propose this solution.

Here is the VISIO diagram representation of what it would look like:

We have designed an Android-based wildfire recognition software module relying on trained image recognition. The system currently relies on a pre-trained neural-network based ImageNet network specified to differentiate between wildfires and normal flora through the embedded Android device camera. As a demonstration, a video of our current system, trained on only 250 images, can be found at GitHub. Upon commercial release, the system will be trained be over ten thousand images, in preparation to handle different field conditions.

An automated, beacon based navigation system will be designed for the drone upon commercial release. This may be done in-house or through collaboration with potential commercial partners currently developing autonomous drone systems for search and rescue applications.

We have created the architecture for such an application, due to lack of time we didn’t create this application. This application would be installed on user premises, with fire department and state , NASA could potentially use this application as well to notify users who call them for information on wild fires along with their current capabilities. Please refer OneNote Link.

The idea is to make this application as user friendly as possible. Here are our wireframes for the same:

Once the user logins (application would have to pair user information with incoming telemetric data to allow for easier analysis.) the application would allow user to start the system or shut it down with one simple action.

For places that are not under estates / ranches and are state owned, state can consider adding cellular capable sensors that can connect to cloud directly (more remote areas but cellular capable) and have drones in predesignated places to intervene / surveil when necessary

The automated drone observation system will rely on commercial, off-the-shelf products integrated into a single package. These components are the drone, AI-enabled camera system, sensors, and support components

Initially, lighter lift drones featuring smaller camera devices would be used to trial the system. The lower resolution and zoom of their onboard cameras would naturally present challenges to fire identification, particularly at longer ranges, but their lower cost would make them much more affordable to the average consumer and exempt of many FAA regulations (<250 grams)

Larger, heavy-lift drones (<20kg) featuring quadcopter designs, may be provided as a possible future upgrade, featuring larger onboard DSLR cameras with higher resolutions and zoom capability. Such systems would allow the identification of wildfires at much safer ranges, while also possibly tracking multiple fires at once.

The initial system should be capable of running off commercial Android devices, these integrate routers, camera, and processor capabilities in a cost-effective package. Future iterations would feature upgraded components, and possibly the separation of camera, processor, and routers.

With the help of more data and data analysis, this can be scaled further to have predictive models. (things like information from power lines that have caused this and the conditions that created the power lines to cause the fires, if those conditions are met or power lines need repair to pre-emptively fix problems before they become bigger and harder to handle.

This can be scaled to help with other disasters and disaster prone areas. (known variables that come together to cause known issues)

This would make the system more expensive on the onset, but reduce costs in terms of data telemetry (nuisance data, wrong sensor information etc)

Our team consists of a design expert, a cloud expert, and a ML/Mobile app developer.