Arcturus | Don’t Forget the Can Opener!

Cyclops is an application that could determine the safest place during an earthquake, along with the necessary checklists to be prepared for the disaster. 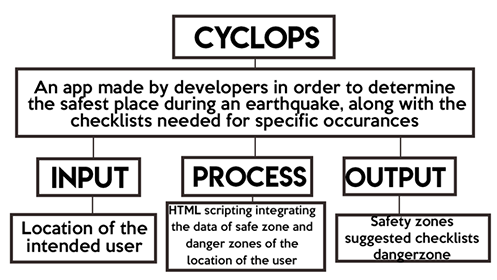 Uncertainty. The feeling of doubt and the mere essence of the unknown is one of mankind’s greatest fear. Mixed with the potion of disaster, it is the perfect formula for fright and chaos.

Earthquake. One of the deadliest and inescapable disaster that is a frequent occurrence to the Philippines due to our location. It lies along the Pacific Ring of Fire, which causes the country to have frequent seismic and volcanic activity that transforms to the shaking of ground.

Earthquake is also said to be unpredictable and because of this, Philippines already lost thousands and thousands of people, natural and human landmarks were gone and it could also affect our economy negatively. The reason behind the deaths is the lack of knowledge of the citizens on where they should go to avoid falling debris and slabs of concrete. The only solution to this problem is an early evacuation of citizens to the nearest safe place.

Because of this, our team decided to develop an application that would help every citizen to be well aware and prepared on what to bring and do when the earthquake comes. With the earthquake’s unpredictability, the application is extremely necessary so that the users could create their checklists to know what they need to bring and do before, during and after the earthquake and know a safe place that is nearest to where they are to avoid loss of lives. Lastly, the application will also provide the safest place where the citizen could go before an earthquake happens. It will also provide a visual information among its users with what are the places that are susceptible of the dangers of earthquake, aside from determination of the safe places one can transfer to circumvent the prospected earthquake.