Escapee's of 318 | On the Shoulders of Giants

Escapee's of 318 has received the following awards and nominations. Way to go!

Our project is an open-source platformer-style video game intended to teach young children about stars within constellations. It is made on a simple platform known as G-Develop 5, and is easily expandable by ourselves and the community. 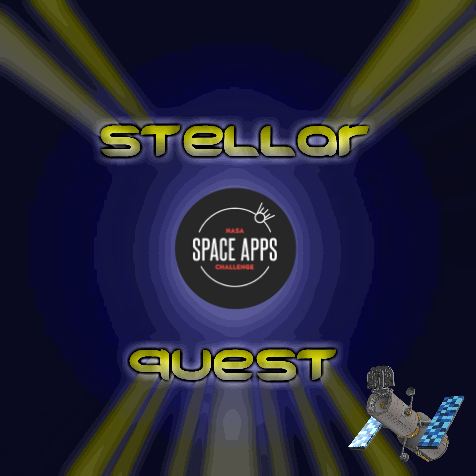 We are the Escapees of 318. Our objective was to create a fun way for children to learn about stars in different constellations. We did this by creating a 2-Dimensional platformer video game we call Stellar Quest.

At The Space Apps Event:

When we first started, we weren't sure what direction to take our project. The team decided at this point in the process that we wanted to make our game appeal to a younger audience, teaching them about constellations. We had several options and ideas for how we could present our game. Would we create a board game? A video game? A card game? We discussed the pros and cons of each and decided on creating a video game. We chose a video game as it allows for anyone with a computer and internet to easily access the game.

What we wanted out of our project and how we achieved it:

As previously stated, we wanted to create a 2-Dimensional platformer to teach young audiences about constellations and the stars within those constellations

We were faced with a challenge of choosing a game design engine to work with. We discussed 2 major points for this decision. First, the ability to be expanded upon by others; and second, flexibility, or what the game studio is capable of. We decided that since the project was most certainly going to be an open source education tool, it would be better to make it easier to expand upon.

We decided to use the G-Develop 5 game design engine. We chose this as it works on a Graphical User Interface (GUI) based trigger system. This helps as it opens more doors to who can edit it because the person editing it doesn't need advanced programming experience to do so. Built into the system, there is also simple and easy to use sprite creator & animator. Additionally, the person(s) working on the project would not have to download any other graphical design resources, or learn external animation software should they decide they want to animate their sprites within the game.

We set ourselves an attainable goal for the 2-day period and a plan for the future. Our goal for the weekend overall was to create 7 levels of the platformer game to teach the main stars in the constellation Orion. We also set a plan on how the game generates more content. We new we wanted to update it more and add more levels ourselves. However, in addition to us making levels, making it open source, we can also get other people who may be subject matter experts, teachers, students, hobbyists, creators, and everyone to expand the content of the game and grow it's reach within the community. In all, the goal was and still is to create a fun and enjoyable learning environment for kids!

Creating the levels took various efforts. 4 main things had to be done for each level. First, the level needed it's bare layout; where platforms, enemies, collected item (star), and the end point of each level would be located. Second, all the trigger statements needed set. Very much like conditionals in coding, the trigger statements commonly use values or If/then logic. We had to establish things such as, if player is in collision with an enemy take away a certain number of points in relation to the time the player is in collision with the enemy. Third, we had to create our artwork/graphics for the game. Initially, the G-Develop 5 system comes with pre-defined stock photos for each model. We did keep a few defaults which had fit in perfectly with the game. However, most of the level elements we re-textured to give a more space-like look to the game. Lastly, we needed to integrate the educational element. To do this, we decided to create informational graphics which are displayed near the end of the level only after the star item is obtained by the player.

Along the way, we also tested the levels and had guests (Including a child within our target audience) test our levels. We knew our game wasn't perfect, and knew it could be improved upon. After testing, we found a couple issues with the game. We got to work to fix as many of the issues as we could. We had went through more testing and were very pleased with our results. Though the game wasn't and still isn't fully complete, we had reached our goal and made exciting plans for the future.

Along our 2-day journey, we created future plans and goals. First and foremost, by the end of the event we had created a GitHub repository for our project since we wanted it to be opened to the community and improved on by the community. As for ourselves, the Escapees of 318, we discussed our team goals for the project. We would like to implement a title screen with level selection Graphical User Interface. Additionally, we discussed on having an end scene which displays the constellation which the player has created after completing a certain number of levels. Lastly, since we only made 1 constellation the weekend of the event, we discussed creating more levels which would hold stars which are included in other constellations. Ideally, we were thinking each constellation would be like a chapter within the game with many individual levels per chapter. In all, we believe our project isn't fully complete yet; it has a long way to go and a large potential to become a fun, engaging learning tool.

The resource used to find basic information on each of the 7 main stars of Orion used in the informational graphics in Stellar Quest.