Silent RD-1 | Mission to the Moon!

It is a rover to explore unknown regions on the Moon - lava tubes, equipt with remote laboratory it can analyze rocks, search for water and explore radiation levels for future human exploration 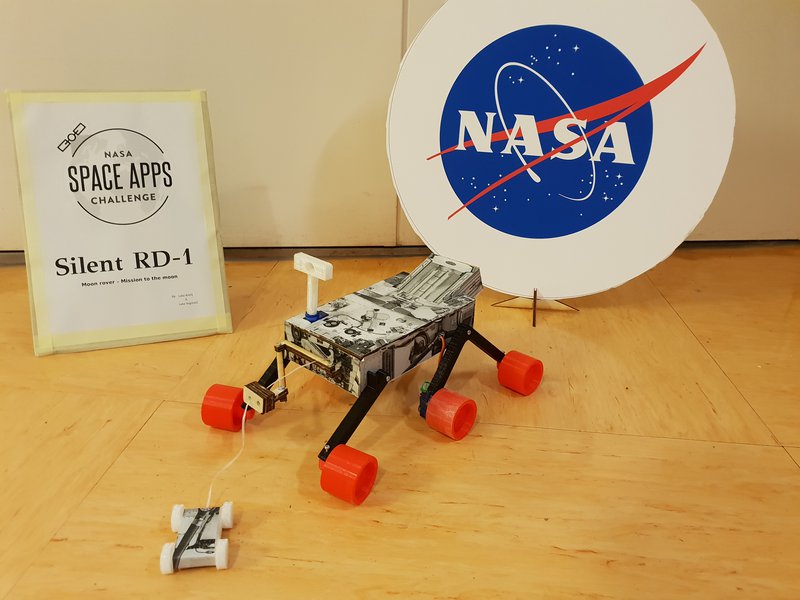 Our mission is to explore the lava tubes, formed on Moon by the flowing lava in the past. Our goal is also to find an appropriate site/tube to set up a Lunar base, safe from meteorites and from harsh Lunar environment conditions (temperatures, cosmic radiations).


Our idea is to upgrade the Curiosity mission to Mars and use it to reduce the cost of the expedition, by using the already well developed Nasa applications used on the rover. We designed rover Silent RD-1 (inspired by Curiosity rover). It will be an automatic science laboratory on Moon, With the addition of a smaller rover Arcus to explore lunar lava tubes. It will take examples of the soil, store them and then take them back to the mother rover Silent RD-1 to make the analysis in the onboard moon lab. The probe has the capability to drive on both sides, so no matter of the orientation and conditions in the terrain, it, is attached to a winch and electrical cable on the rover Silent RD-1 so main rover can lover Arcus into the lava tubes/caves.


Our goal is, as we mentioned, taking examples of the soil and find out the elements present and do spectral analysis of the samples to define the geological past of the Moon. As well as searching for water in the tubes and under the surface, Lava tubes are also potentially important location for constructing a future lunar base, if results will prof that solar radiation is within safe limits for the human. Which may be used for local exploration and development, or as a human outpost to serve exploration beyond the Moon. We hope to learn more about the geology of the Moon, as we are optimistic to find new elements in the lava tubes and also find an appropriate site, for humanity to settle down on Moon. .¸


According to the NASA documents, we studied the locations of the lava tubes, and have chosen three potentially landing sites, near the lava tubes: http://scngapp.ga/landingmap

The rover Silent RD-1, inherit the hardware from Curiosity, plus the probe Arcus, is introduced in the application. The main focus is to use hardware to detect and explore the tubes. We know Curiosity rover is the best rover so we took it as a comparison and make improvements to make it even better and optimized for exploring Moon.


Rover consist of five different groups of sensors. It contains three cameras: MastCam, MAHLI and MARDI, four spectrometers: APXS, ChemCam, CheMin and SAM, two radiation detectors: RAD and DAN, an environmental sensors pack called REMS and atmospheric sensors called MEDLI. The probe Arcus have only three applications: it is capable of filming in visible and IR specter, detecting radiations in lava tubes and a robot arm, to pick up samples from the cave to bring them to the main rover for analysis.

We have a common goal: explore the universe easy efficiently and with lower cost.