MEEP has received the following awards and nominations. Way to go!

Arctic Trail is designed to educate people about climate change. This game will guide you through a journey in the arctic as you attempt to survive and adapt to the changing conditions.

One of the main issues luring over the 21st century is the impact of man-made climate change as a consequence of rising carbon dioxide levels in the atmosphere. The impact of these changes has been observed with the higher variability of extreme weather events such as hurricane Irma, the strongest recorded hurricane in the Atlantic Ocean. The abundance of information on climate change paints a decisive picture of where our world is heading towards. Parsing this information to the masses proves to be the main challenge. NASA’s climate change and global warming data visualization system from the MODIS satellite is an essential tool for the accessibility of this information and by using these resources, our role is to create a platform to spark interest and further education in climate change.

Arctic Trail is the platform that we have designed to educate individuals on the adverse effects of climate change in the arctic region. Our inspiration stems from the classic 1974 computer game - Oregon trail. The original game was designed to teach school children about the realities of 19th century pioneer life on the Oregon Trail. Much like the classic, our game targets a younger demographic to educate them about the potential impact of our actions on the future of this planet. The designed scenario involves an expedition into the arctic circle over the course of 4-9 years, to display the effects of global warming on the biome.

Even though the scenario is fictional, features were integrated to include real events that happen in line with NASA data provided by satellites such as GRACE, ICESat, and MODIS. Key features include:

The Arctic Trail is created as an education tool template with the ambition of future development. Descriptions of potential considerations are listed in the Future Considerations section below.

Similar to the original Oregon Trail, the Arctic Trail puts players through a manipulable story line. Starting at Ellesmere Island, between Greenland and Northern Canada, players travel to the Arctic using a sled driven by oxen, while experiencing harsh environments that accompany gradually rising temperatures. The player status updates constantly and a snapshot of the variables are shown in figure 1. 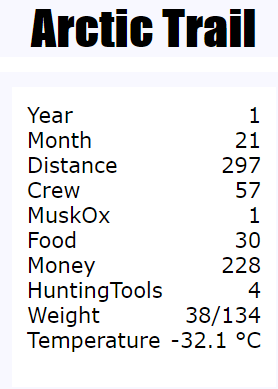 During the journey, players are prompted with several randomly generated instances. These include:

The events we chose to include are as follows:

In addition, the temporal range was also chosen for the game to best represent NASA’s data and include key events. As reflected through NASA cryosphere data, the Arctic ice cap melting hit an all time low during 2012; reaching to only half the size it was in 1979. The comparison of the surface temperature of the same day in 2003 and 2012 are shown in the figure 2 and 3. 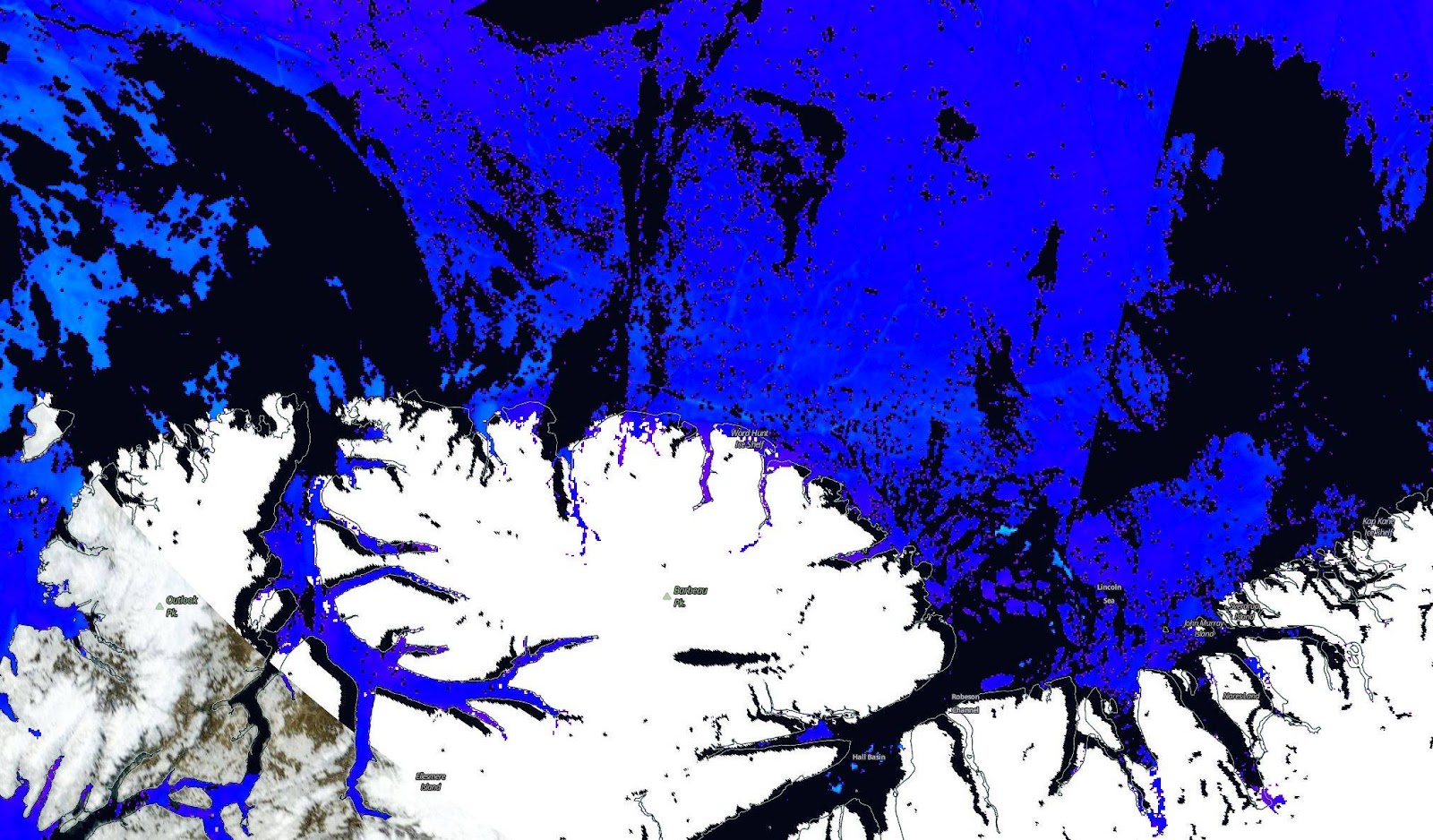 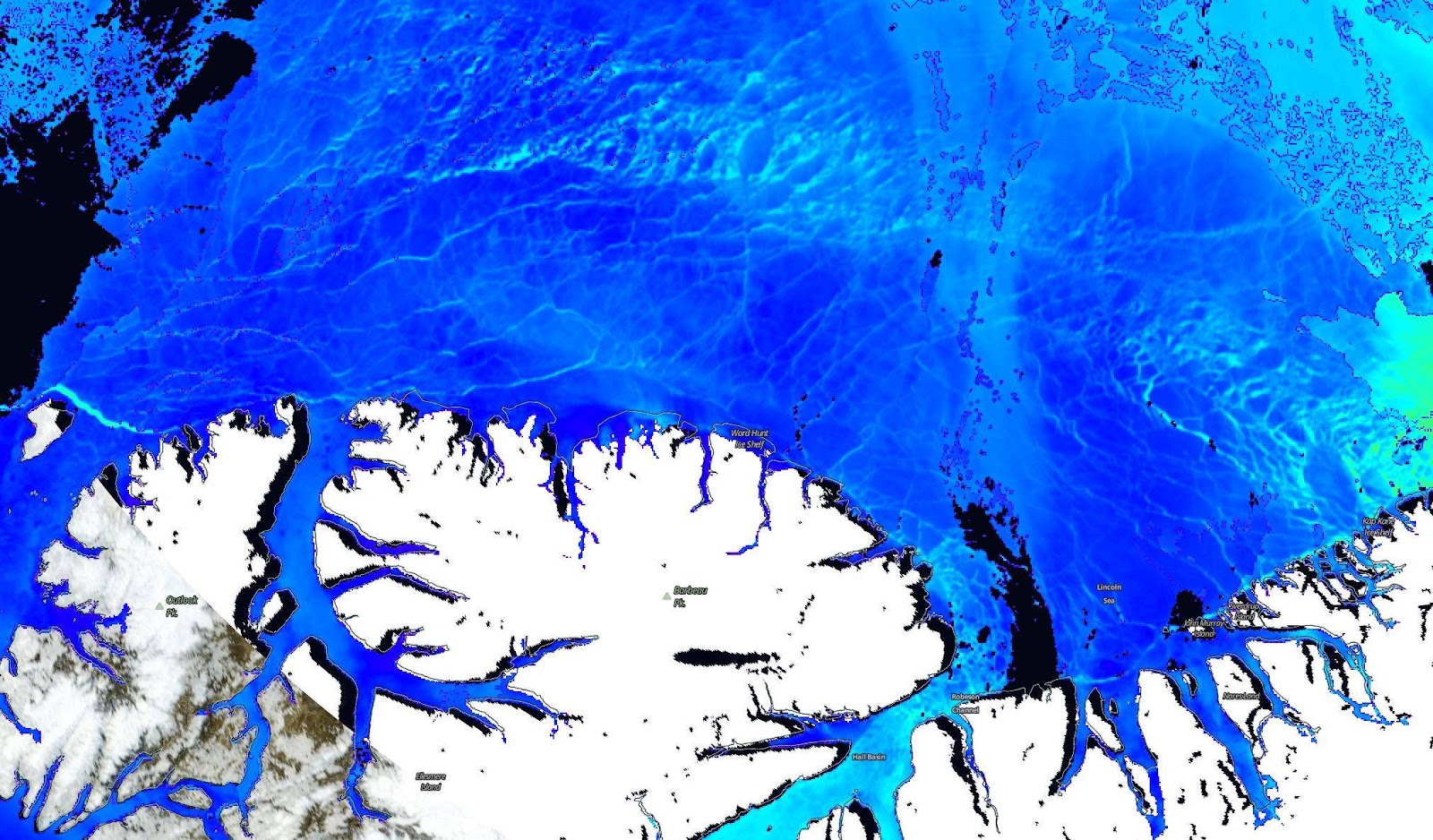 
As time goes on within the game, the average temperature of the region increases at a calculated rate. Over the course of the journey, the melting snow and ice will result in greater resistance and issues during the travel. To simulate this impact, the speed at which the sled moves decreases as the player progresses further within the game.

With NASA data at our disposal, we plan to analyze the data in a easy and comprehensive way so that anybody can learn about the impacts of our carbon footprint. Although climate change has been heavily proven with NASA data and research around the world, the impacts and immediate threats are still reticent and to be effectively communicated. Through the form of interactive game play, Arctic trail offers players a distinctive learning experience. As you journey through the arctic, you will face many obstacles that accurately represent many real time events.

Our designed was based off NASA’s cryosphere earth data. Using the comparison tool while overlaying multiple sensory data in the Arctic, we were able to pinpoint a general path for our game. The data that was used were from the ice surface temperature (aqua and terra) MODIS satellite scans, sea ice and snow cover temporal data sets. The average temperature in the game was calibrated using the cryosphere data, by designing a path along the chosen temperature gradient from our starting point through to the arctic circle.

With the criteria as broad as what the polar quest outlined, the amount of content that we wanted to incorporate was best done through an already established game known as Oregon Trail. As a game that originally taught children about the realities of pioneer life, Oregon Trail was a perfect skeleton to base our Arctic quest. By augmenting the structure, variables, and mechanics, our team repurposed the game to fit our design of an expedition in the Arctic.

One of the biggest challenges for us was to integrate our different expertises into a project that could be completed within 48 hours. With one Mechanical Engineer, one Material Engineer, one Mathematician, and one Psychologist/Neuroscientist, we knew that it would be best to expose ourselves to a more creative and novel challenge. With our limited experience in coding, we decided to spend the weekend to learn and develop our game using HTML5, CSS and JavaScript. Greater challenges were faced by our decision to take on 3 new programming languages, and moments of frustration were common amongst our group. The implementation of our ideas and the feasibilities due to the constraints of our skills proved to be difficult. Despite this, we met all the desired design criteria for our game.

Possible future improvements to the game may include: