A Day on Earth is an interactive story-based game that will allow users to understand water processes, forest condition, and pollution. This game will educate users as well as allow them to choose how the story will end. 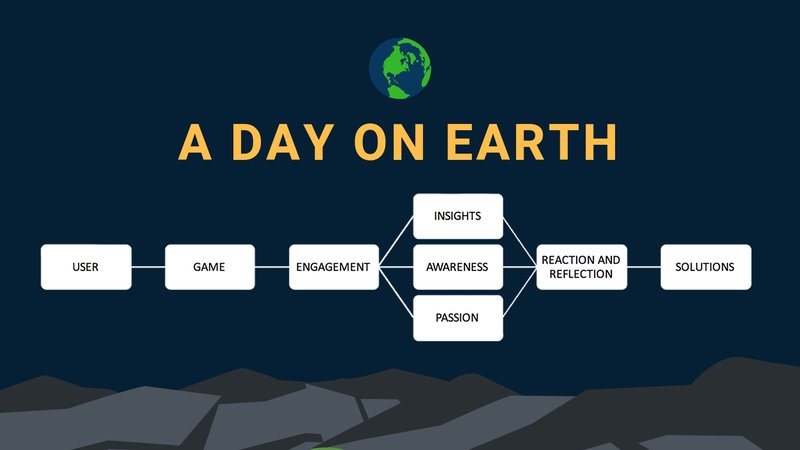 The world functions in a way that is indeed beyond human comprehension. The only thing that we are capable of is providing explanations in order to understand the concepts behind common phenomena. However, this common knowledge is being neglected by most people. Even though concepts that help us take care of our world are always taught in school and are always a topic of different campaigns, it seems like people are not even interested to practice what they know and to do what is taught to them as right. Ignorance may indeed pose a very huge problem, but negligence is what causes the very destruction of our world.

In order to help solve this problem of ignorance and negligence, the group decided to develop a game that will not only inform the user but will also introduce situations where their decisions will greatly affect the game.

In order to develop the game, the group has decided to use free software called Novelty. Novelty is a visual novel maker that is currently in beta version. It is free for all and provides a WYSIWYG development platform. Aside from Novelty, the group utilized their knowledge of Adobe Photoshop in order to create NASA’s images in an animated graphic suited for the game.

What the game does:

The application is an interactive story-based game called visual novel that will allow the user to be part of a fictional story. The fictional story will incorporate facts in order to inform and educate the user. The specific topics that will be tackled are water cycle, forest conservation, and pollution. With these common facts that are mostly neglected by the people, the game will be informative to children as well as to those who are not knowledgeable enough about our world.

The game allows the user to be an entity that is not from Earth. His goal is to observe the Earth in order to prevent further the destruction of the said planet. During his stay on the Earth, he will encounter challenges where his choices will definitely affect the outcome. Depending on his choices, he might go straight to the failure of his mission or succeed until the very end. Not only will the user learn from different trivia but he will also be able to appreciate the creative take on NASA’s images that is turned into animated graphics.

Since the game aims to educate people in an interactive and fun way, the group aims to produce different more identical games but with different stories and different topics. Also, further choices will be incorporated in the game to allow user to use their critical thinking capabilities. Improvement on visual as well as effects will also be done.

Not only will this allow us to connect to people who are not that knowledgeable with science but those people will also be able to appreciate and accept scientific facts in a fun and appealing manner. They will no longer be bombarded with facts but will be introduced to scientific concepts in a very creative way that will let them love science.