Explorer has received the following awards and nominations. Way to go!

Swarm Scanner - a swarm of robots: is inspired from biological systems such as colony of Ants/Bees or Flock of Birds, in which complex tasks are accomplished collectively by the colony, which is impossible when attempted at stand alone individual level. 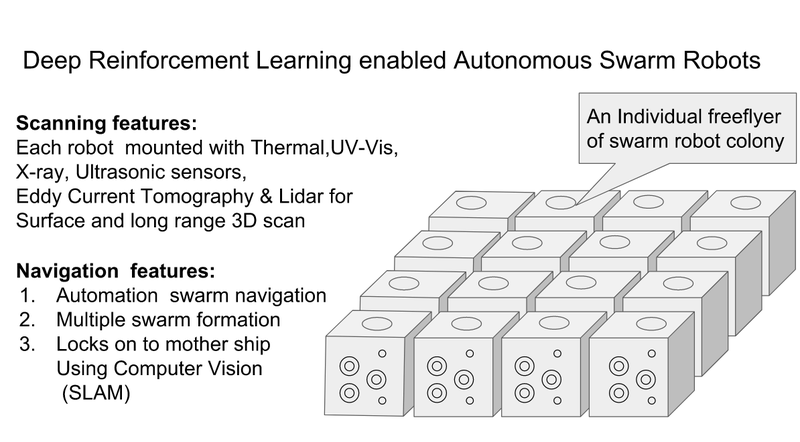 Swarm Scanner, is a swarm robotics system with members of the swarm being cube shaped free flyer robots. This Robotics System is inspired from biological systems such as colony of Ants/Bees or Flock of Birds,
in which complex tasks are only accomplished by collectively by the colony which is impossible to accomplish when attempted at stand alone individual level.

The design consist of Autonomous Swarm Robotic System powered by Deep Reinforcement Learning engines for planning the flight around the Mother Spaceship for MMOD damage detection and quantification.

Computer vision Algorithms such as RESNet and other such CNN algorithms is used to detect and quantify damage. For this composite images along with other sensor data is used to segment out the damaged area.


This robotic is modular like lego blocks and and can be stack mounted one over the other Saving space while within the mother space craft. Or while in cluster formation mode for long range Photogrammetry scans outside the space craft that can efficiently interlock with each other to form one larger free flier entity. While in such formation, the thrusters can work in tandem to propel the swarm to desired direction and destination around the Mother-ship.

Computer vision : AI engines powered by latest Deep Learning Algorithms are used to detect MMOD damage, this is achieved by training with images collected from various other spacecrafts that has faced MMOD damage in the past.

Similarly Reinforcement Learning for Navigation, Flocking and execution of various other tasks in a coordinated and accurate manner is done by initiating / simulating are initiated before the space craft is launched. Reinforcement learning is optimized to efficient use of propellant (Cold Compressed Gas propellant for microthrusters of each of the Free Flyer Robot).

The Swarm robots are sent out for MMOD inspection in three scenarios.

2) Inspection triggered by detection of any kind of threats to the spacecraft.

3) Detection of anomalies such as as rapid Pressure drop, and other such events