CubeAID has received the following awards and nominations. Way to go!

CubeAID is a system that assists and takes care of spacecrafts. It is a 3-stage program that provides a general and focused inspection of MMOD impacts combining a cubesat, a robotic spider and an image processing algorithm. 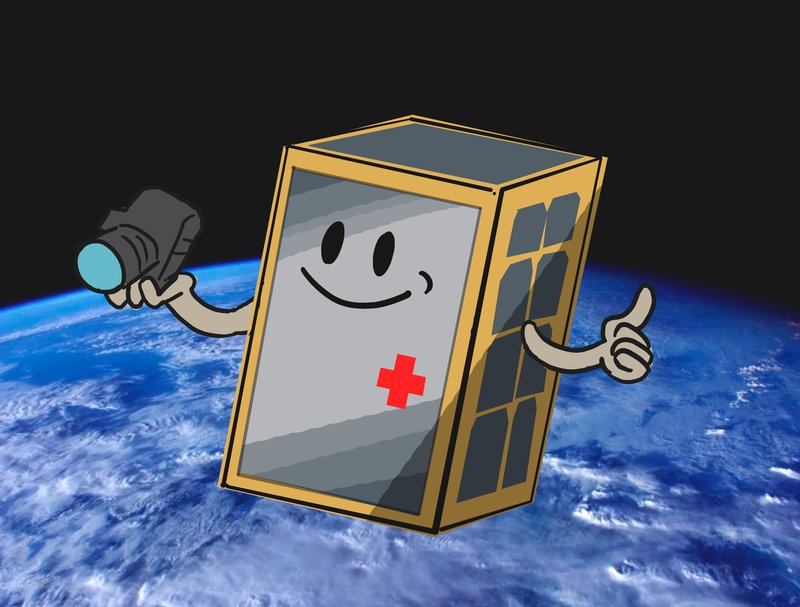 We are an interdisciplinary and international team that got together in order to join our efforts and ideas towards a common goal. We were able to communicate with ease, share our thoughts and all together formed an impressive synergy which allowed us not only to work efficiently but also enjoy our time working as a team and bond much more than we imagined.

Spacecrafts (satellites in orbit, interplanetary ships and deep space probes) on service suffer from micro-meteoroid and orbital debris (MMOD) impacts quite frequently during their missions. Usually those impacts are small and do not mean a threat to the structure, but the sum of hundreds of impacts or just one mayor collision may be enough to ruin an entire mission, or even worse, threaten the lives of the crew.

These projectiles travel at speeds of between 10 to 14 km/s and measure around 50 µm to 2 mm, which means that they could easily carry more energy than a bullet. These characteristics make it impossible to track and deflect them, so an active prevention system could not be implemented.

In cases where there is no crew there is currently no solution to this problem; when there is one it is not always possible for them to go out and fix it by hand, so an automated solution must be found.

To design an autonomous free-flyer to inspect a spacecraft for damage from Micro-Meteoroid and Orbital Debris.

The CubeAID mission will be developed in one of the most defying environments known by humans: outer space. With no pressure, extreme temperatures, high levels of radiation and other variables that living organism from earth and common devices cannot withstand. For that reason, materials and technology applied in the mission must be of the highest levels available so that its features allow a long-term lifespan in an outer space environment.

Given the difficulty of developing an active prevention system, the CubeAID system is inspired on a search and rescue scheme. The multiple stages aspect of the project uses the concept of synergy often seen in nature, especially in ant colonies or bee hives. The biggest advantage that nature has over technology is the ability to learn, evolve and adapt, this is why we chose to use artificial intelligence for the second stage, the image processing. We imagined the first stage as a hawk, which observes from the distance to find a prey, using its eyes with a narrow field of view but great precision and focus. The third stage is inspired by arthropods, particularly on how spiders are able to grab onto almost any surface and walk without losing their grip; as well as this, from their ability to shoot webs we got the idea of the epoxy loaded needle. Finally, investigating on the way they hunt their prey we got the idea of attaching vibration sensors to the most critical parts of the spacecraft in order to estimate zones of possible impacts for further analysis with the other stages.

A two-units cubesat orbiting the host vehicle collects information on the state of their external surface by taking pictures. This can be achieved due to a slight phase shift between the main vehicle’s orbit and the cubesat’s orbit around earth. Having orbits with the same orbital period (this is done by having the same semiparameter), same (or similar) eccentricity, and slightly different argument of perigee, true anomaly and inclination it is possible to achieve an orbit of the cubesat relative to the host vehicle that covers all its surface using minimal fuel for orbit mantainance. This orbit design allows for the cubesat to scan the entire surface in around 5 to 8 orbits, which in LEO takes less than a day. The orbit was specially designed by us using our own orbit simulator in python.

We borrowed code built for bullet impact detection algorithms given the similarities between the two. The algorithm uses Color Segmentation, which is a technique that convert a RGB Image to a binary image (black and white) by dynamically detecting the major color in the image. Then the noise of the image is reduced by doing morphological operation (a term that is used in Image processing), that is to spread color smoothly. After this preprocessing is done, with the use of IBM’s Watson Visual Recognition we are able to distinguish the impact holes from the rest of the structure.

An Improvement to this algorithm, will be done by using a Machine learning detector algorithm. By producing and taking pictures of impacts and also using NASA’s Space Debris Sensor, which is functioning in the ISS since December 2017. The method will be based on cutting-edge algorithm for detection such as: FASTER RCNN or MASK RCNN.

Once the impacts are found, the specific coordinates are calculated (from a model of the vehicle) and given to the Spider.

A robot designed to imitate a spider with articulated extremities and exchangeable ends to make the spider more suitable for the surface it will be inspecting.

The technologies used in its limbs, particularly in the pads, allow the spider to walk anywhere in the outer surface of the vehicle for an in-depth specific analysis of each impact zone. As well as this, it contains a needle capable of depositing an epoxy resin over the damaged areas in order to prevent the microfractures from spreading and causing major structural damage.

The two proposed technologies for the pads are: electromagnets and setule based nanostructures. Electromagnets would be more convenient on metallic surfaces. On the other hand, for ceramics or other surfaces, a nanostructure resembling the setules on the feet of spiders (these work on Van der Waal forces) would be the used.

The cubesat performs an active surveillance and inspection of the exteriors of the spacecraft. It takes high definition images which are instantly sent to the main vehicle, where analysis is held. If the amount of images and data exceeds the capability of the vehicle, the data can be sent to a ground station where further analysis can be done.

Onboard the main vehicle (with a higher computing power) or on ground, the images are processed in order to find places of interest where impacts are likely to be found. Once these places are pinpointed, the coordinates are sent to the spider.

Once the Spider Robot gets new coordinates it is released to approach the designated area, and with the help of a front camera it positions itself on the desired spot.

A digital microscope is activated and starts collecting precise data (depth, width, propagation) on the impact and characterizing the damage.

If considered suitable, an epoxy dose is disposed on the place to avoid future fracture propagations.

Once it finished it returns to its charging pod on the surface of the ship.

Having developed the Pre-Phase A of our mission here is a summary of the key points of the development: