Mixed Reality immersive experience of known exoplanets with smart filtering for locating earth-like exoplanets. This app would provide context + presence of the planets + star systems, giving an alternate way for scientists to look at the data. 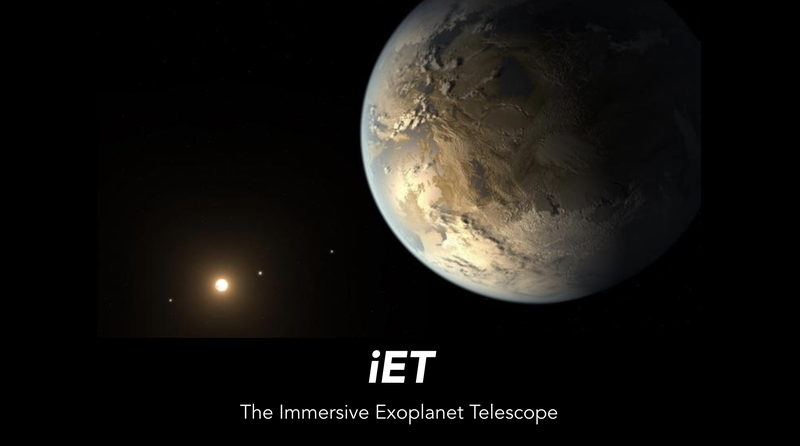 iET is a mixed reality immersive experience of known exoplanets with smart filtering for locating earth-like exoplanets. This app would provide context + presence of the exoplanets + star systems, giving an alternate way for scientists to look at the data – from scatterplots to immersive presence with the planets.

Describing exoplanets as worlds suggest that these are objects that can be not only perceived but also experienced. With enough information, one can imagine being on the surface of one of these worlds.– Lisa Messeri, Placing Outer Space, p. 113

iET was inspired by the work of Lisa Messeri – anthropologist at Yale University – who believes that the key to truly understanding all the newly discovered exoplanets is creating a sense of presence. Mixed reality/VR creates presence like no other technology. We chose this medium because it provides huge potential in giving scientists a way to literally be with the data of these unknown worlds – by literally bringing them into the presence of these planets. iET is meant to help scientists visualize what these new worlds might be like outside of scatterplots and data points – to make distant exoplanets “more like intimate, recognizable worlds” (Messeri).

One of the main goals of iET is to help visually identify data leading to habitable planets. Throughout iET development, we’ve prioritized showing data that expressed the potential of habitability for each exoplanets - such as a planet’s distance from the sun, it’s place in the habitable zone and what elements have been discovered.

DATA + RESOURCES: The data we used to create this app primarily came from NASA’s Exoplanet Archive. We also dipped into the Exoplanet Encyclopedia (exoplante.eu) to access elemental data for each of the planets. This collection of data was the foundation for what was used to program the creation of the planets and stars you see in the current iteration of the app from work done this weekend.