iSpyFire has received the following awards and nominations. Way to go! 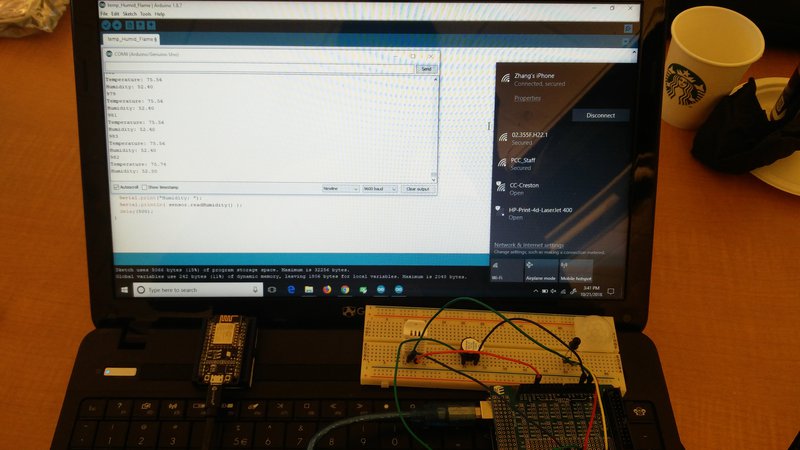 iSpyFire aims to detect fires at a much quicker rate than satellite by acting as an instant trip wire mechanism. To do this we used multiple sensors such as a temperature/ humidity sensor and a flame sensor that will be reading in live data from the environment. This data is then received and transmitted as a wifi network SSID through a node MCU chip. An example SSID is, #001.405F.10H.1, where #001 is the tag for the chip, 405F is the Fahrenheit temperature recorded, 10H is the humidity, and 1 represents whether a flame was detected with the infrared flame light detector, 0 if no flame light was detected. Since this information is live data that is constantly being sent out and refreshed, there is no need to connect to the network. Also, in case the sensors are destroyed, the data that is instantly outputted and read already exists and are good enough indicators that a fire is present. Furthermore, these sensors and chips are rather cheap to replace. With this data we then plan to trigger an application that local officials and people in the vicinity have installed on their device that displays the information last gathered of the fire event as well as a map of where the triggers were set off so as to trace the fire and give the community a better sense of the areas to avoid. The community will be notified that local officials have been contacted and will also be given a brief of things they should do. Below are some more details of the tools that we used and how they have helped us in this challenge.

- Arduino Uno Chip: This chip is what keeps the sensors running and gathers the information from the sensors that we used.

- Node MCU Chip: This chip is what enables us to create a full wifi network with an SSID representative of the data gathered by our sensors.

- Infrared(IR) Flame Sensor: This sensor used in our project is sensitive to the light spectrum emitted by flames and is not as responsive to other light, for example a flashlight. Since the read is directional as well, it will not go off unless the flame is directly in front of it therefore reducing the disturbance from other possible light anomalies.

- Arduino IDE: This is the code editor and compiler that was used to program the sensors and chips.

- One of the challenges that we faced was with the IR flame sensor itself and the fact that it was directional. However this could be solved by attaching the flame sensor to another cheap piece of hardware known as a Servo which is a motor that can be programmed to rotate at different speeds and directions. We plan to have it continuously rotating so that it way span a wider range of the environment being monitored. It is also a plan to have the motor stop rotating at first signs of a reading from a flame's light spectrum in order to confirm that there is a flame after a certain amount of time elapsed. Then to continue rotating if it was a false read.

- We also face the challenge of distance but have decided that directional WiFi receivers be utilized to read in data being outputted by these sensors which can span across a considerably large range.