An automated swarm of patrol drones, Our aim is to prevent wildfires from spreading using fire extinguishing bombs. 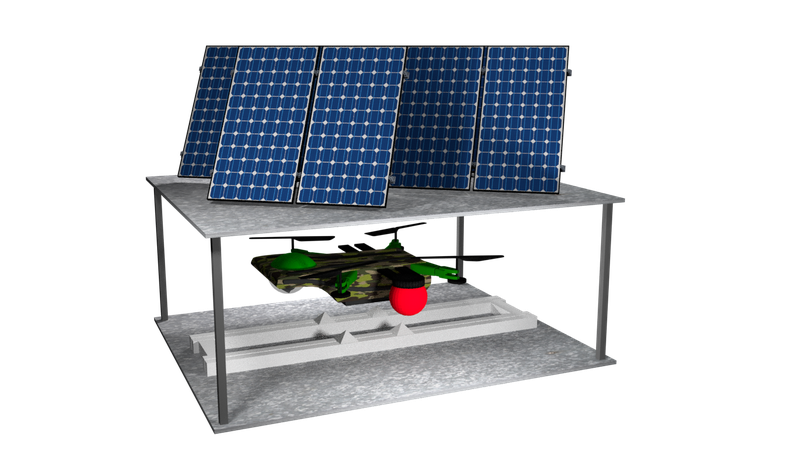 Purpose: An automated swarm of patrol drones, with the purpose of early detection and prevention of wildfires.

Overview: The drones will patrol the area, and signal to firefighters if a wildfire is detected.

Every drone will be equipped with standard flight sensors, including collision detection, gyro-stabilization and long distance thermal camera. Some special drones will have the ability to carry and drop fire extinguishing bombs. This ability can be used to suppress early wildfires, thus preventing any further damage.

Implementing a net of charging stations and hives in order to get the optimal performances for any area.

The charging station will serve as a temporary stop for the drones. Once reached a charging station, the drone will have the battery automatically swapped with a fully charged one. This solution will keep the drones flying without having to wait hours for them to charge.

The hives will act as a warehouse, to store the drones when not in use, and as powerhouses, to charge their LiPo batteries using renewable energy from the sun.

The user application allows the user to report a wildfire. The a drone will check the legitimacy of the report. If it is confirmed a swarm of fire extinguisher drones is engaged and sent to the location.

The application will record past occurrences in a database, giving the user a sight of the damage done by wildfires, as well as the damage prevented by the system.

Safety: The user application will have a real time alert system. If the user is in a endangered zone, he will be warned and the safest route to a nearby safe area will be prompted. We want to stop the fire before it spreads, but when it does spread, we aim to keep people safe