Tell the world about the asteroid named Bennu.

Ever heard of Bennu?

Ever Heard of Bennu is a video describing the asteroid Bennu, and how we can use relics from our past to unlock our future. 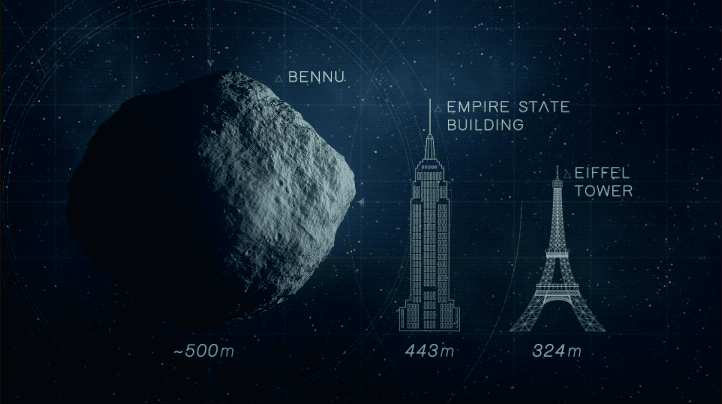 We are presenting our initial research on this project in the following video:

Remember when you open your old diaries or your childhood photos, a Montaj of memories just starts to flow through your mind. How fascinating it is. You time-travelled and got way back in your mind. You see that how much you've changed. How you wrote before and how you write now.
How you looked before and how you look right know. That's the feeling that an astronomer gets when he sees into the space. The universe tells us our past, how we came into being. This fascinate us, fascinates me. Because our existence in due to existence of universe. No universe no us. This fascination makes us to look deeper into space. And that's what' NASA is doing.
As a result NASA is doing different missions to examine extraterrestrial bodies. This thirst of knowing ourselves led NASA to the mission of closely examine an asteroid discovered in 11 Sept 1999 named Bennu . A 9 years old named it after a bird.
Now question arises Why Bennu? Why dig some soil from a rocky thing flying in space?
There are very solid reasons for that:
This asteroid is very close to earth and it's orbit resembles to that of earth. Which is the reason that it has relatively high chance of collision with earth. This closeness means it's easy and quick to get to it. Furthermore, it's very old and carbonaceous. Which means it has a large number of carbon compounds As carbon is apart of organic compounds Bennu may also contain organic compounds. This can answer our lifelong question that how life came on Earth and many people believe it came from an asteroid See Asteroids are very old, even older than planets in fact asteroids join to gather to make planets. As a result they do the job of a time capsule. Bennu may give us history of our solar system. From where life came? And many unanswered questions.
For that purpose the great NASA launched the program OSIRISReX. A spcaecraft was launched into space for a sample return mission from Bennu. It was launched in 2016 and in 2017 flew by Earth and used its gravitational field to incline it self with the orbit of Bennu. Finally it caught a sight of Bennu in Aug 2018 and will reach it on 3 Dec 2018.
This spacecraft will deeply scan the Bennu to find it's exact shape and surface area. This will scientists to find the Yarovsky effect. It is necessary to calculate Yarovsky effect to find exact trajectory of bennu. Yarovsky effect is best explained by Mr. Bashar Rizk. (play clip)
This OSIRIS ReX spacecraft is an example of its own. It's full of innovations. It will use TAGSAM to extract the sample. Which means it'll not land on the Bennu but will use its mechanical arm to extract the sample while hovering. This operation will take no more than 5 sec. So, the space craft will be in direct contact with the asteroid just for 5 sec.
The space craft will then save this extraction in a properly sealed capsule. The space craft will then come back to earth and drop the sealed sample into the Earth's gravitational field. This sample will be dropped in Utah dessert. This sample will help for decades in upcoming scientific era.