The Family | On the Shoulders of Giants

We designed and prototyped a competitive multiplayer card game containing Hubble images as integral part. The cards have different power levels; the more powerful card wins. Power considers facts and beauty.The back of the cards contains a puzzle game. 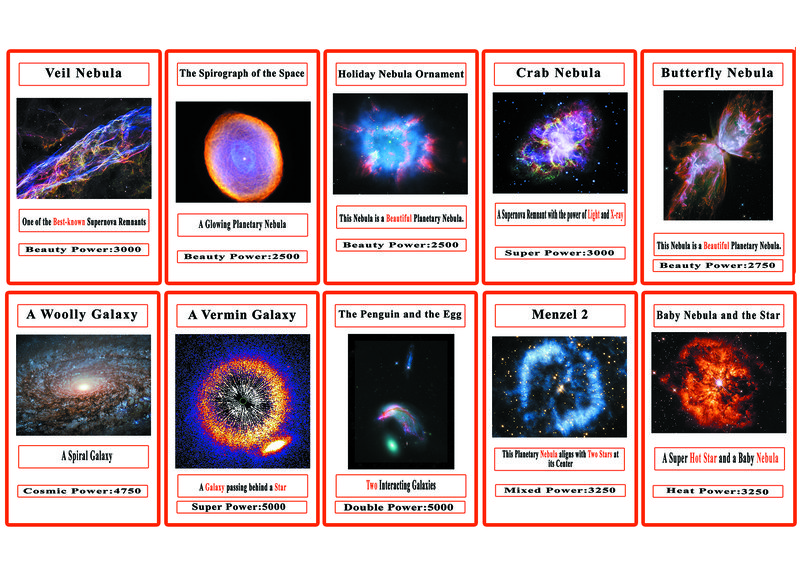 We did our job.

We, The Family Team, have the honour to tell you that we did our job.

We have chosen the wonderful category, A Universe of Beauty and Wonder. Under this category, we were happy to choose “On the Shoulders of the Giants” challenge. An amazing challenge that taught us a lot about the sky, nebulae, stars, galaxies and more wonderful facts. The challenge showed us the beauty of the universe through Hubble’s images.

We decided to make a card game. We designed and prototyped our design as well, using the beautiful, breathtaking images by Hubble.

-To make a change in card games. We don’t really have card games that let people know about space beauty.

-To give people, especially young ones, some information about the space.

-To have fun while we learn new information.

Description and design of our card game:

- We used different images by Hubble to be integral part of our game. We used images of different beautiful nebulae, stars and galaxies.

- Our game is a competitive game that can be played by two players (or more if they use more than one set of cards).

- The game has 10 images, by Hubble, on 40 cards. This means that each image is repeated 4 times on four individual cards. We have, then, 4 sets of the 10 images as the game cards. Each image has its name written as a card title of card ID up-right the image.

- The game has a focus on beauty as well. If a nebula is extraordinary beautiful as a “butterfly”, i.e. butterfly nebula, its card is higher than most other colleague planetary nebulae.

- Inspiration is all over the game with the extraordinary beautiful images that show significant coupling, uniting or interacting of wonderful objects and the increasing power the cards gain if they contain these wonders.

Design and prototypes of cards:

We have designed the game, and then, we have put a design for the ten-image cards using the Hubble images and made this design using Adobe Photoshop CS6.

We have attached within this report a JPG file of the design of all the cards on one A4-sized paper.

We also attached a JPG file for the design to be printed on the back of the same A4 sized paper.

Actually, we used/put another (whole) Hubble’s image to be printed on the back of the same A4 sized paper. We decided that even the back of the cards design paper can be cut after the print to be used as a separate puzzle game as well to maximize the fun.

We have printed 4 copies of this file as a prototype of our game to present before the judges judging Ismailia NASA Space Apps Challenge event. This, not only, means a complete set of the card game, it also means 4 sets of a puzzle game that the cards bears on the other side. Anew game is here that one can play alone or compete with another player(s) to see who will be faster in solving the puzzle.

Rules of the game:

- As we have mentioned before the game is competitive. It can be played by two players (Up to four players can play but the game would end so early. If you have more than one set, that would be more fun for multi-players over than two).

- Each player will have four cards at the beginning.

- Each of the players will put her/his card on the table down on the face so that they do not show the image and the power level it contains. So no one of the players should see the other’s/others’ card.

- Then, they uncover all cards to see what they contain.

- The owner of card with the higher power wins the two cards.

- Then the players put another card until they run out of the four cards of the turn and other four cards to be distributed to them until the game ends.

At the end of the game, the winner is the one who wins more cards.

- If the (two) players put cards that contain equal power, then, the cards are to be left on the table and they have to play and put another two cards on the table so that the owner/holder of the more powerful card this second try will take the two equal cards along with the new card of the competitor.

- To put the rules of the game according to the suitable criteria, we read a lot of sources to know more facts about nebulae, galaxies and stars.

- We had to learn tools and programs to design and create the game (e.g. Adobe Photoshop).

- Challenges to find the right images for the product.

-The time was critical, the first day was a weekend and could hardly find places in our city to print the cards the right way to create the prototype.

- The internet connection was not good many times at the off-line event, so we faced some challenges to surf pages and download images.

We hope that our idea has brought joy to you as the boy who delivered it is a nine-year-old child. We have developed this game with the assistance of his brother, an eleven-year-old boy; credit goes to him for the game name and for the idea of the puzzle game (on the back) idea. As a family, we thank you for this opportunity to participate in the lively challenge. Thank you very much for evaluating every idea. I really wished to have more than two days to develop more ideas.

Kindly, find he attached file with the PowerPoint of the presentation to be presented before the judges and the JPG files of the card game(s). Thanks to the sun and back.