Skywalker | On the Shoulders of Giants

Skywalker has received the following awards and nominations. Way to go!

ASTROPOLY - The Infinite Universe is aimed at teenagers/adults, to develop their interest in universe and creative thinking through imaginative approach. 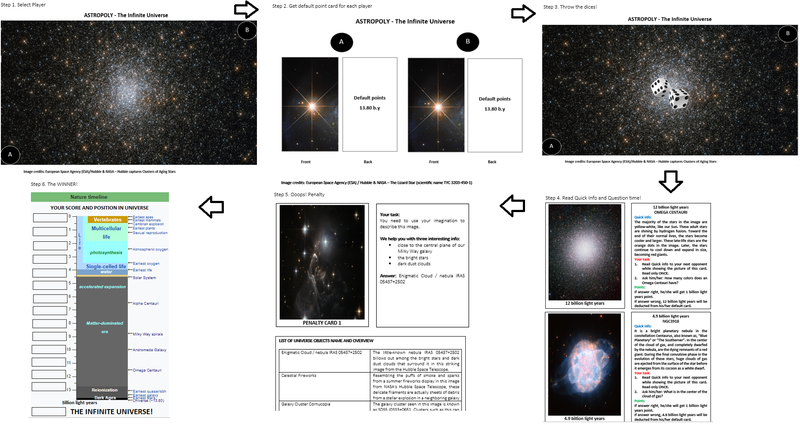 The objective of this project is to travel into deep space without being an astronaut.

A Universe of Beauty and Wonder

The challenge of this project is to create a game using images from the Hubble Space Telescope as integral components.

We are solving a challenge called "On The Shoulders of Giants". We decided to choose a memory and imaginative approach for the solution. This is an emerging approach in teaching and learning from various level of study (Jensen, 2015; Wibowo et al, 2017). Many scholars explain that imaginative approach is based on a well-researched pedagogy with a long history of practical application in the classroom (Slater, 2015; Wilke, 2006). Therefore, we adopt the method and technique for the solution.

Upon discussion, we decided to choose the card game as the type of solution. It allows 2-way communication in this game while the players develop and stimulate their mind to memorize the information given and solve the problems. Playing a card game can create fun environment and connect social interaction among the players. This is one of seven principles of effective design to encourage learning from games (Houser, and DeLoach,1998).

We are targeting at teenagers and adults for this game. This is because the information and images are suitable for these two groups. In recent study indicates that there is a positive effect of playing card game on cognitive function and depression in the elderly with mild cognitive impairment. Ma, Cho and Bo-Kyoung (2018)demonstrate a significant positive change result especially in reducing the depression of the subjects. In addition, Kordaki and Gousiou (2017) show in their 10-year review study that card game can motivate and engage players and also to promote social, rich and constructivist educational experiences while at the same time integrating with new knowledge.

According to numbers of scientific research, we offer the following from our simple card game;

1) Impact: This solution has a contribution to cognitive function, reducing stress and depression, and stimulate creative thinking for teenagers and adults.

2) Creativity: This solution encourage creative thinking of its players. It is one of many ways to disseminate research work discovered by NASA.

3) Validity: The approach used for this solution has been scientifically proven by many research studies. See references.

4) Relevance: This project meets its objective and theme for this challenge. This project has a complete prototype to present the mission concept. However, it needs more time to duplicate, polish, and test the effectiveness of the game. This game is user-friendly, easy to play and has a clear instruction.

Instructions: You can refer to project image above or click on Update tab for clear images.

This is a competitive type of card game. You need at least 2 players and up to 6 players.

We used the following tools that available online and free for non-commercial use:

Video editing: Videopad by NCH Software (we selected for non-commercial use) and https://hesetube.com/

Jensen, S., 2015. The nature of imagination in education for sustainability. Australian Journal of Environmental Education, 31(2), pp.289-292.

We identified three main challenges while completing this challenge

This is a 48-hours hackathon and we are able only to design a prototype, explain mission concept, outline the game instructions, and disseminate a creative way to learn science particularly about the Universe. We unable to test, duplicate, and polish the product (e.g. sharp images, smooth transition video).

The use of data from NASA database are high because we relied heavily on NASA database especially some universe images. We are unable to transfer all the NASA images in the database into our card game. Therefore, we selected few interesting image to appear in our prototype.

Although we managed to come out with the prototype and mission concept, our skills and expertise are very limited. Therefore, we chosen the simple way from designing, editing, and writing.

Prepared by: SKYWALKER (nemesis and acca)