Nebula | On the Shoulders of Giants

Humanity has built a Dyson sphere around the sun that is now expanding. Explore images captured by the Hubble Space Telescope as we move our home to the Orion Nebula to continue to survive. 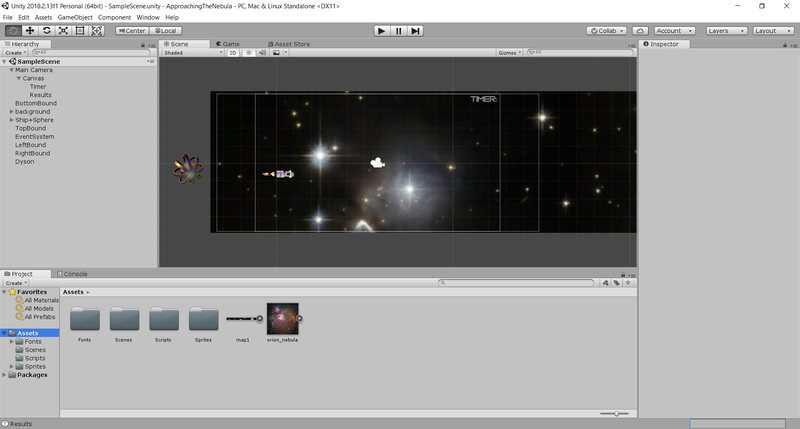 Approaching the Nebula is a platform game set in the far future well after humanity has established a Dyson sphere around the sun. The player must travel with humanity to the Orion Nebula where a new star is forming. Our current star, Sol, is approaching its Red Giant phase and is no longer a viable source of energy. Surviving this journey comes with complications such as a time constraint and a temperature constraint as the Dyson sphere without a power source will quickly drop to critically low temperatures.

This game brings awareness to the Hubble Space Telescope and its discoveries by using images from the telescope as integral game objects. The background consists of Hubble images that have been stitched together to create a map that the player must explore to reach your destination. During the journey, the player must dodge nearby stars to avoid damage to the spacecraft and Dyson sphere as they fly through space at relativistic speeds. Time dilation plays an important part in Approaching The Nebula's mechanics as it bring awareness to advanced physics topics such as special relativity and creates a time constraint for the player.

Approaching The Nebula aims to educate the player on the wondrous images captured by the Hubble Space Telescope by highlighting their distance from earth. This game encourages curiosity to further extend human exploration father into space than ever before.

Here is our code.