mtfck | On the Shoulders of Giants

Choose-your-own-adventure type game about space travel through most beautiful nebulae in known space. 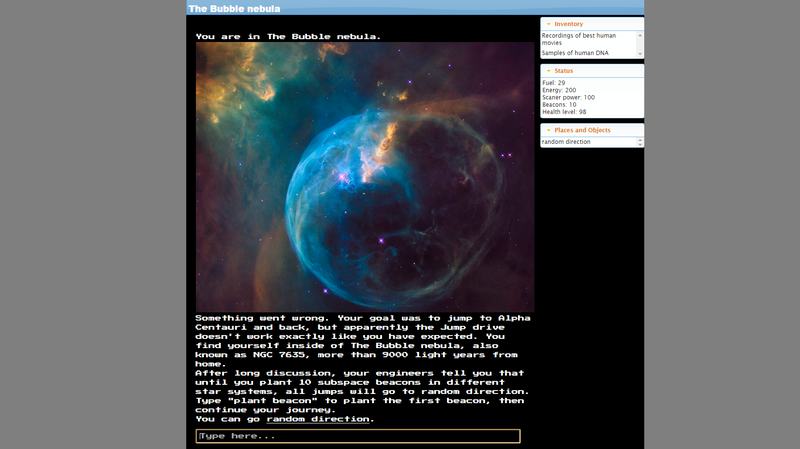 Team of first year students, (plus 2 freelance software developers) decided to try themselves in the area of game development.

We decided to use existing free game engine called Quest 5 (http://textadventures.co.uk/quest/), and write an adventure game for it. The story tells about first faster-then-light human spaceship on it's great journey to return back home, and on their way home - to explore strange new worlds, to seek out new life and new civilizations, to boldly go where no man has gone before.

For illustrating the game, we used amazing photos made by Hubble space telescope over the years. Among other photos, we used images of Bubble nebula, Butterfly nebula, Pillars of Creation nebula and so on.

The Quest 5 engine has its own scripting language which was not familiar to any member of the team before the start of the work. We also didn't have any previous experience in game development area. For most team members, it was first experience working as a team on a software development project.

But despite all the difficulties, we managed to create a finished (albeit relatively simple) adventure game, which can be found on Github: https://github.com/pavelsinkevich/asmallstep

Published version of the game can be accessed online: http://play2.textadventures.co.uk/Play.aspx?id=wzw...