LAICA has received the following awards and nominations. Way to go!

Check out my mixtape!

Searching for intelligent life is one of NASA's goals. Our project tries to bring DNA data storage as a technological solution to democratize the information of what Earth and humanity means to each person and identify ourselves out there. 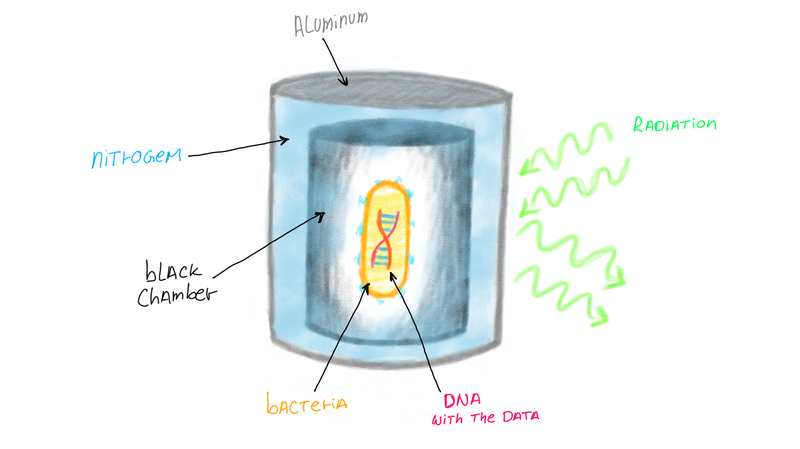 Since the beginning of human history, we are curious. We question almost everything and we want to know why we are here. With the latest technological discoveries, we can see and understand so much from the universe. But, is this true? We also go deeper and deeper and, then, we notice how much we still have to learn, observe and explore. In an attempt to understand more and show ourselves to the universe as intelligent beings, we look for others. Back in the 70's this discussion was a fever with Carl Sagan's popular way of doing Astrophysics. He was the one who proposed the concept of a Golden Record, a record that contains symbols, pictures, graphs and sounds to represent Earth and the human history. They were launched on the mission of Voyagers 1 and 2 so, when the spacecraft leaves the solar system, the record wanders the interstellar space to, maybe one day, be intercepted by the unknown beings and tell them about our legacy.

Problems with the Golden Record

Questions in our first approach to the problem

One of our goals is to increase the chances of being noticed by extraterrestrial intelligent beings, as we send more than one device for contacting (differently from the Golden Record, which is just a collection of 2 pieces wandering the universe - with Voyager 1 and 2). This could be achieved with a data storing technology that provides less weight (for launch and replication) + more capacity.

Let's share Earth's and humanity's history, focusing not only on what the big authorities want to share, but also on what WE (citizens of the planet) want to show our unknown fellows. We will adapt the content, keeping the "hey there" message by Jimmy Carter, all the basic information about our Math, our Biology, our measurement units and everything that explains our science method, so they can know how our system works. Add more chemical elements that we know and that exist in our visible universe and show how our history contains beautiful and extremely sad moments. We want to show our wars, our conflicts, the global warming process, but also our love, the people who help others, how we survive to natural disasters together, leaders who engaged on the mission of making Earth a peaceful place. This is our basic message.

But do you want more? [1]
Don't you want to show your own passion? Pictures of your favorite place on Earth? The sound of your voice saying "hello, stranger" in your language? A dance of your culture? Don't you want to say "Check out my mixtape! This is how Earth looks like to me and this is how I exist and identify myself here!"?

I guess we really need some space for more than just 115 pictures...

And also a web-based tool on which you can send us the media you want to share!

3. How will we store such a big amount of data?

What we want to do is to use one of the latest discoveries of Genetic Engineering. A DNA molecule will be our target. It is known that 1g of genetic material is capable of storing around 215 millions of Gigabytes [2]. This means that with 35g of DNA we could send the number of Golden Records as if each human here on earth had one for himself. The DNA can also survive for a really, really long time (thousands [3] or even millions of years [4]) if it is in a cold, dry and dark environment. The genetic molecule is also considered universal and it is a way of communicating based on Mathematics since we convert media to bits to DNA bases and understand depending on how the civilization deals with molecules, so they don't really need to be like us and sense things as we do.

Nowadays, the data storage in DNA is a lot easier [5] to be done within a bacteria (in comparison to a synthetic DNA [6] for example), since this being has an adaptive immune system that combines CRISPR and CAS 1 and 2 to store the genetic content of a virus and break the genome to insert new sequences (which we can define as this virus DNA and read back again [7]). Using this technology and investing on research to make it cheaper and more accurate, we can achieve the assumed to be the best way to store big data.

But how could they tell that an organic molecule has a message from other beings (us)? Our idea is basically to put at the beginning of the sequence an intelligible sequence of numbers that shows a pattern (so... Not a coincidence): A, TT, CCC, GGGG, AAAAA, TTTTTT, CCCCCCC… Similar to the functionality of the Golden Record's "cover".

4. And how could we protect these DNA samples with our humanity's and Earth's history?

To preserve the material, as told before, we need a cold, dry and dark environment. Remembering that the capsule goes inside a interstellar spacecraft, we can use this environment and also the space environment to protection. Radiation of course has to be rejected by the material (aluminum [8]) that surrounds both capsule and spacecraft.

This project is being developed with

Check out my mixtape is an innovative way to use new data storage technologies and promises something that humanity asks itself since the beginning of times:

Join us in this search and interchange of identity, culture, integration, tolerance and technology research!

[7] E. Gente. “A Living Hard Drive: This GIF Was Stored in the DNA of Bacteria.”