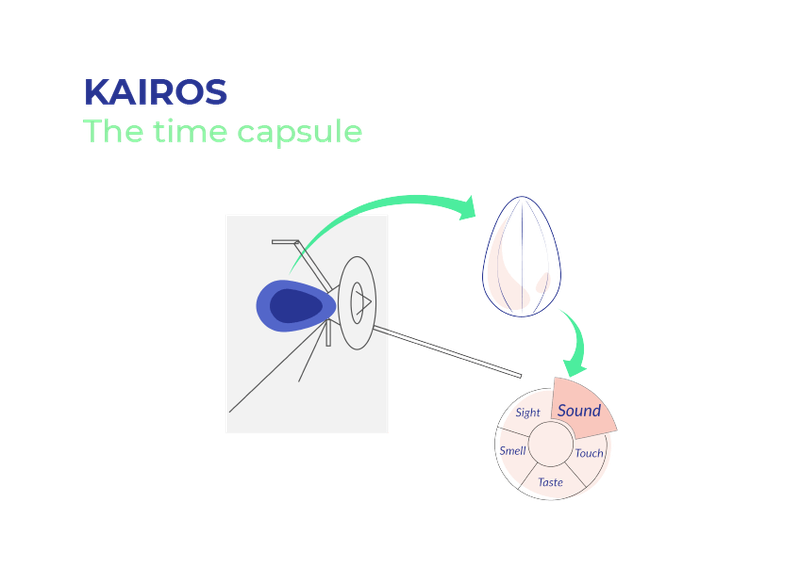 We chose the challenge of “Remix the Golden Record”.

We were fascinated by:

-the thrill of connecting with other forms of interstellar civilizations

-the opportunity to rediscover humanity and its solar system

Since the challenge was to create a time capsule, an object that has to embrace the facets of time, space and moment, we decided to call ourselves Kairos.

Kairos (καιρός) is an ancient greek words that literally means “the right moment, the occasion”. It was the word that resonated with us and the challenge the most. It aptly conveyed the meaning of time, but in sense of “moment in between” in which something special happens. While the word chronos (χρόνος) means time in a quantitative way, kairos expresses the qualitative expression of time.

Our first step was to try to dive into the essence of humanity and its solar system. For doing that we reframed the challenge into:

How may we condense the essence of humanity and the solar system in a time capsule and send it to the outer space, in order to create a bond between us and an advanced space faring civilization?

After that we researched the previous attempted missions of time capsules, especially the Golden Records on the Voyager Mission.

We decided to take inspiration and remix the past missions revolutionizing the aim of the mission itself (connecting with space faring advanced civilization), with a set of new relevant values and meanings.

Our project aims to have an impact not only on extraterrestrial life but also on life on earth.

A puzzle box for interstellar civilizations which use primal instincts and intuitions to educate the essence and basic elements forming the human lives.

-understand and condense the essence of human beings

-educate people to rediscover their senses and basic logical processes

Long term goals (from the most feasible to most difficult):

-sending a human crafted object into outer space. Farthest than ever before.

Why is our project relevant?

We believe that we are living in a time of fear, in which populist governments are rising again and creating mistrust and hate towards people.

We want to find what makes us humane in order to help people rediscover life and all its wonders.

We hope to build and inspire communities to come together to share and voice their thoughts.

Sometimes for better understanding oneself it’s useful to talk with external entities.

What better ways than doing it with writing to a pen friend?