S.P.Q.R. has received the following awards and nominations. Way to go!

Working on the Moon landing challenge we came up with an algorithm and a hopping reusable unmanned rover to increase the efficiency and precision of missions, evaluating landing spots mathematically, and faster travelling times thanks to sub-orbital jumps. 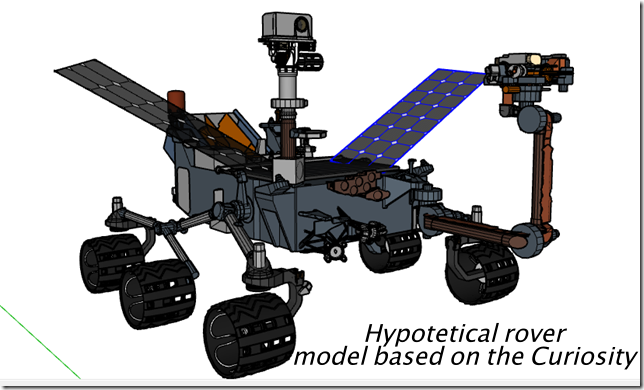 The Space Launch Sistem 1 B (SLS), is the heavy lift rocket we planned to use to carry our rover straight to low Lunar orbit, before our skycrane lands it safely. The plans NASA developed this rocket to support future crew mars missions, just as the transport of parts to the Red planet. The payload capability of the rocket it’s 39.5 tons, as we planned the rover to weight neither more than 5 tons. The plan is also to use the residual fuel of the Explorer stage to perform the de-orbit burn, avoiding to waste kilograms of unused fuel.

Following the base idea of the Skycrane that rover Curiosity will use in 2020, we developed a similar module that will land safely the rover on the moon surface. The great aspect about our skycrane is that is Reusable and will not get destroyed just like the curiosity. It will be slim, lightweight and refuelable, and will be the fast-travel way for our rover: while with a normal vehicle you would have to drive to long distances, taking weeks of maneuvering and endangering the rover,with the Imperātor you can perform sub-orbital jumps to farther distances, or even just beside a mountain, in a few hours, keeping the rover safe. The sky crane will also work as the central computer for the mission: while the rover scans for information, the raw data is instantly sent to the Skycrane, that will elaborate and process the raw data into scientific information, before sending it through communication delay to earth or to an hypothetical lunar village. (skycrane will never save any data, the processed info are sent immediately to the receiving module, bouncing through relay).

Estimated about total 500 deltaV at full cargo + idrazine tanks for the reaction control system. CheMin data analysis and heavier data processing made on support modules (lunar village or Deep Space Gateway). The structure is as easy as 4 metal beams, joined together to form a rectangular grid, empty in the middle to host the opening floor and so the space for the rover. 4 flexible beams cross the structure starting from the corners, joining in the exact center holding a retracting wire, that will grab the rover, with the possibility of moving the wire along the bars to grab the cargo even if it’s not perfectly aligned with he centre.. 3 small engines per angle, fuel tanks over them, idrazine tanks and res blocks aligned with the centre of mass, cpu, remote control probe and computing operations.

A classic style of rover, similar in construction to the curiosity, will slowly be drove down by the skycrane to start exploration. Its main purpose is to acquire data about the geological composition of unexplored lands, just as extracting ice samples from the deep glaciers discovered by satellites during fly-byes. Thanks to the possibility of taking the samples back to the gateway laboratory, the taken samples will not be analyzed aboard the rover, giving us more space to develop the other sensors of the rover. The equipment will include a ChemCam, so two different instruments combined in one: a laser-induced breakdown spectroscopy (LIBS) and a Remote Micro Imager (RMI) telescope. ChemCam has the ability to record up to 6,144 different wavelengths of ultraviolet, visible, and infrared light. The Detection of the ball of luminous plasma will be done in the visible, near-UV and near-infrared ranges, between 240 nm and 800 nm, to check possible variations at the Lunar poles. Navigation cameras (32 mpx minimum, wide angled) will give the overview and the position of the rover over to the mission control. The only data processed on board are the raw images from the cams of the rover. Electricity will be provided using a decaying radioisotope in the rover, as a solar panel for it’s main power supply. Rocker boogie wheel system.

The rover mission is focused on discovering and mapping unknown parts of the Moon, just as the sample return of important materials like lunar ice or the in situ analysis of gravitational or geological anomalies. The long autonomy we gave to our rover, allow us to keep the mission on for months, just as the continuous research over different points of interest. The ability of being completely reusable, refuelable, reparable and assembled in space, makes it autonomous for decades, as it can be upgraded over time, makes lunar exploration not a problem anymore. One launch, one landing, years of mission. We are really looking onto finding details about water on the moon, its geological accurate history and it’s unsolved anomalies.

Mounted the rover with its skycrane as the payload of the SLS rocket 1b, the mission starts with the takeoff from Cape Canaveral, following a polar orbital turn

Once out of earth’s atmosphere, on a stable polar orbit, we prepare for the transfer to the Moon following a trans-lunar injection transfer (Hohmann-similar transfer), and the deploying of the fairing on the payload

Transfer to the moon, following a polar-orbit transfer

Rover deployment by the top wire

Skycrane takeoff and land near the rover

Communication will base on relay: the rover will send raw data directly to human laboratories (lunar village, Deep Space Gateway) bouncing through comm delay. The main processing will be divided for lighter data on the rover while harder will be sent to the sky crane that will compute it all before sending it to human laboratories.

Method to find the optimal landing point and surface path for every space mission, with limited time and a definite objective

For us the way to choose the perfect landing point is to have a defined method for determining an efficient route, throughout places that are more likely to give us the most interesting discoveries relative to the mission, with less waste of fuel and damages.

Our core idea is to give a value to hypothetical points on the lunar surface and to the path between the points.

The value to the points will be given according to the interest of the area, within an objective method for everyone for every point, while the path will be valued relatively to the difficulty: the length and the slope of the path. this method is not only applicable to moon landings, but is suitable for every celestial body, possibly not stars :D.

P is the value given to a point and depends on the research we are doing on a given planet.

L is the value given to the path between two points, and increases with an increasing difficulty.

Vπ is the value given to the whole path.

n is the number of possible points, n is constant for all possible paths and depends on the length of the trip of the rover.

Not all p (points)and paths can be considered because of their hardness to be reached or surpassed.

The path with the greater value will define not only the path of the rover, but also the landing point.

The objective valuation of P and L is necessary to establish a scientifically and mathematically rigorous research.

P and L should be divided in factors that will determine their value.

Fl is the factor given to a particular characteristic of a point or a path, and depends on the research we want to do.

Fl is a value should be given to all different aspects of a mission in order of importance, determined by vl, and all should be in the same scale.

For example, the probability of finding water in an area could be important on determining the value of a point, and in a mission concerned on finding water vl would have a great percentage of importance. A possible Fl for L is the distance. Maybe from one point there are two possible paths leading to two points A and B, is also possible that the point with the higher P valuebecause of the presence of water is linked to the starting point with a long path so with a big valuation because of the distance. In the big picture, the other point even with a lower P valuation would be the optimal destination if L value is low too and summing all VA>VB.

A possible scale for Fl,

There are certainly several ways to evaluate Fl, what we propose is to scale everything from one to ten for the simplicity, but the greater the number of unities in the scale, the greater the precision.

For example Fi could be a value between GV and LV

How to use and launch the algorithm,

The method to determine the best path, and landing point, must be launched by a powerful computer that can computate the various possibilities and decide the single best option. We don’t think that based on the data there’s a law to obtain perfectly the answer without computing all various answers, but if we want to computate very difficult situations quickly or the number of possibilities is too high to computate we can fasten the process by starting from highly ranked taking away the others, or modify the factors or reducing the numbers of units in the scale.

The importance of the algorithm in space industry,

The method applied can determine the best landing point and path for every rover and human mission on every planet, moon or asteroid, in a space industry and other complex environments.

The potentiality of the algorithm is to avoid errors caused by the human part of the project giving an objective method to find the absolute most efficient way to take the most out of a mission, in which a huge sum of money has been invested.

In this way space missions not only have the best means but also the best target.

The mission is programmed with sub-orbital jumps is able to pass from one point to another with a relatively low cost and gives to the mission the possibility to have an higher Vπ.

Of course jumps have a high cost in terms of fuel but they guarantee the opportunity to pass from a position to a farther one in less time and avoiding to endanger the spacecraft due to the long journey on the surface thanks to the physical characteristics of the planet (for example Curiosity 1 had to drive for really long distances to get to points of interest).

Having a favourable time-distance ratio, that decreases the value of L (the distance is higher, but it influences only if the rover is on the surface, gets ruined and travel for a long time, while being able to jump saves long time), and being able to get quickly to high valued points leads to an higher overall Vp than a conventional mission.