Koala-fied has received the following awards and nominations. Way to go! 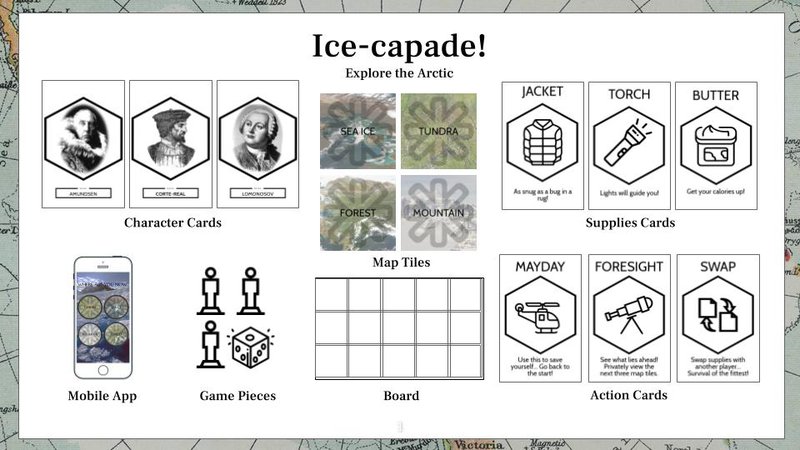 Ice-capade! aims to educate people of all ages about the challenges explorers face when exploring the harsh environments in the Arctic. It uses a combination of a board game and an app to create a fun learning experience for its players. To win the game, the player will have to be the last explorer standing. This game is designed for 3-5 players and each game is estimated to take 30-40 minutes.

The game consists of the below items:

First, players will select a Character Card and a token to represent themselves. They will then set the Start Map Tile and 6 random Map Tiles on the board. The Start Map Tile is the starting point for all players. The 6 random map tiles will help the players plan for their expedition.

Next, the players will need to select 6 items from the Supplies deck. The supplies selected will help the players to overcome the challenges they face in specific Map Tiles so they will need to choose wisely. They will also draw two random cards from the Action deck.

Now, the players are ready to play!

To determine the number of steps they can take to move forward, the player will have to roll the die. If they land on a Map Tile (Sea Ice, Tundra, Forests, Mountain), they will need to go to the Ice-capade app which will randomly generate a challenge that they will have to overcome in order to move to the next round. The random events are taken from NASA's information, and will list down the supplies needed to get through the challenge. If the player has the required item, they are safe and can move to the next round. If they don't, the player is out of the game.

The app will also list down a random fact regarding the terrain the player is on. The fact will be generated from NASA's information. Any other relevant resources from NASA, such as images and videos, will be listed on the app for the players to get more information. If the player lands on a Land Map Tile, they are safe. Landing on a Village Map Tile will allow the players to swap their supplies with other items from the Supplies deck.

To make things interesting, the players are allowed to use Action Cards anytime during the game. These Action cards are designed to either help the player, or help the player sabotage their opponents to ensure that they are the last ones standing in Ice-capade and win the game!