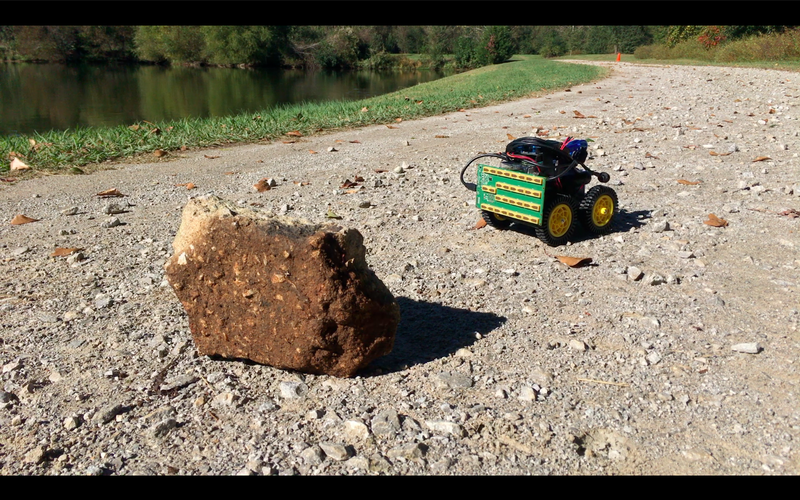 When we first arrive on Mars, there won’t be any roads for us to explore. We have to create them. If we send up GPS satellites, that can allow us to determine our position. We can also build a topographical map of the surface of Mars to calculate the easiest route from one place to another. However, we still have to consider large obstacles that can damage our vehicles, obstacles that aren’t always visible.

We created a radar-based obstacle avoidance system for vehicles on mars.

We used a 3D imaging radar for object detection because of its advantages in the climate of Mars. Cameras and LIDAR work well with high visibility, but that’s not always the case on Mars. Dust storms can make computer vision based object detection difficult. And with an atmospheric pressure of less than 1% of earth’s, ultrasonic would not be practical either.

We would still need optical sensors such as cameras and LIDAR to improve the resolution of our system. The radar we used can only identify objects by their approximate size and position. This works well enough to safely avoid large objects, but a camera or LIDAR could take in much more detailed data to compute the most efficient route.

Our prototype locks onto the closest target above a specified amplitude threshold and sends that data to our robot, which computes a simple route around the obstacle. Our control system would need to be refined and augmented with additional data before it could be deployed on a Mars vehicle. Assuming GPS is implemented at the time of the colonization of Mars, it would not be difficult to obtain a direction of travel from the change in position. Instead of the vehicle blindly driving around an obstacle and going off course, we can use the error between our bearing and direction of travel to smoothly transition back on course following an obstacle avoidance. If the vehicle is operating under human control at the time, the system can take over to avoid the obstacle, then return control to the operator once the obstacle is cleared.