The Mars Evolution | Make Sense Out of Mars

Study the Magnetic Field on Mars? 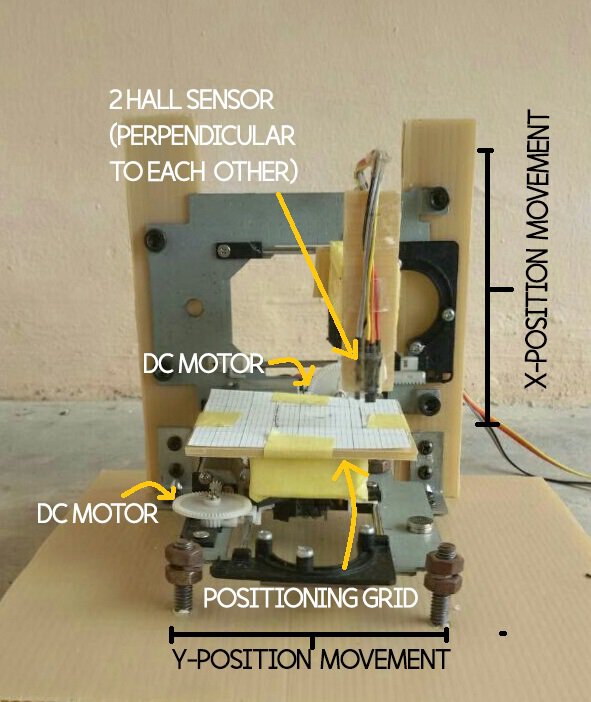 From the definition, we are motivated to map a three dimensional pattern of the magnetic field in free space at mars.

The main objectives of this:

In this experimental set-up, java program was created to control the movement of DC motor using 2 relay SRD-05VDC-SL-C. Therefore, the DC motor was used to control and position the Hall Effect Sensor, which helps us get the magnitude of the magnetic field by providing steady current. The measurement reading was measured with data acquisition and the three dimensional pattern is mapped by a software named Gnu-plot. The purpose of this lab was to learn about the interaction of magnetic field with Hall Effect sensor. We wanted to know if magnetic field put the Hall Effect theory into action when the position is varied. Since the output voltages of sensor increase when the magnetic field strength increase,.

This is the part we do our sketching to design the body of the prototype model and also the circuit.

The hall sensor has three terminals that was connected to; 5V, Vout (A0 and A2) and Gnd of Arduino’s pins while each motor has only two terminals that connect with 5V of Arduino and Normally Open (NO) relay. We used DC motor instead of stepper motor. We used relay with model 5V OUAZ-SS. The relay controls the movement of motors. We used two relays, each relay controls each motors. Motor that controls the x-positioning was connected with pin 8 while the y-positioning connected to 9 pin. We used 6 pin relay but only 4 of them involved in circuit connection. The mechanism of the system is double pole single throw where it accepts 2 inputs, so it able to drive 2 different outputs. One input corresponding to one output. Basically, the number of poles defines how many separate circuits the switch can control while the throw defines how many positions each poles can be connected to.

Throughout the experiment, we used Java NetBeans for our program instruction. The potential difference in the hall sensor are measured using the Arduino Uno by the execution of the coding constructed in NetBeans.