When human first arrive on the red planet they will be faced with a lot of difficulties when it comes to exploring the surface. A drone acompanying the rover on the surface will be the perfect support-system. 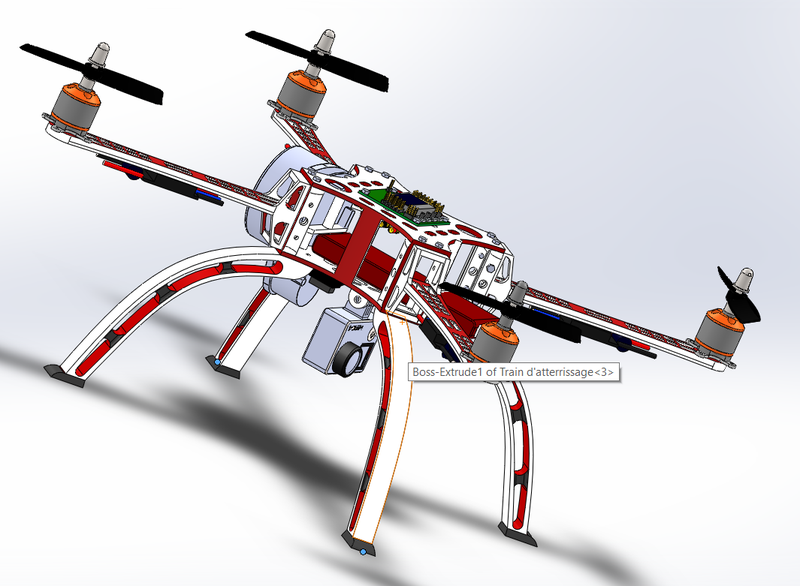 In our project we make the assumption that human beings are able to fly to the mars. A group of space travelers would set up their base camp close to their landing site. As first humans visiting the planet they would need to explore the planet. This will represent a challenging task so the astronauts will need help from different kind of robots supporting their mission.

When the astronauts are goint to explore the planet first hand they will definetly need technical support. We will provide the support needed with a dual approach: A special Mars Rover designed to assist in manned missions accompanied by a Drone will make up the perfect combination to help human beings master all challenges. Let's look a bit closer how this is going to work out.

One of the main functions of the rover is to be used as positioning system. On Mars there exists no GPS as on earth and also the magnetic field is not strong enough to direct the pointer of a compass. So we use the rover to keep track of all the movements. With the distance travelled and the directions we get from the sensors we can exactly calculate the current position.The rover will be a close companion of the astronauts exploroing the planet. They will be either following them on their mission or go and explore locations first before humans go there. And as soon the astronauts will head back to the main camp the rover will securly lead them back on the safest and fastest track.

Antennas on the rover will facilitate communication to the base camp. This will ensure a reliable connection during all situations.

During the exploration the rover will support the team in different ways. For example to carry samples of the soil. They will also go out and explore the next few kilometers before human go there. A lot of instruments and sensors to track the immediate situation (temperature / air pressure / uv radiation / wind) will be tracked by the rover and sent to the astronaut. This allows the astronaut to be informed at all times without carrying heavy gear. The information will just be displayed in the head up display in the astronauts helmet.

A camera and Lidar sensor will be running at all times to create a 3D model of the environment. This will be much helpful not only for the current exploration but is also helpful for future missions.

Compared to the Earth, Mars has much higher mountains. Some of them surpass the surrounding area of 25 km. It is obvious that the human explorers and the rover will come to its limits when there are obstacles in their way. In such situations the drone - which is carried by the rover - will come into the game.

Although Mars' atmosphere has only around 1/10 of the density as compared to Earth, a special drone with ultra fast rotating blades will be able to make short exploration flights. The drone is designed for just long enough to find out about the route that the rover should take but it is not visible for the rover or the astronaut.Equipped with camera and Lidar sensor, the drone will be able to explore the near surroundings and broadcast the video to the astronaut in real time.

The rover and the drone are not just two isolated supporters of the mission but strongly interdependent. One robot needs the other one to utilize the full potential. As the drone has massive electricity consumption, the drone will not be able to generate enough electricity trough its own solar panels. The rover will carry extra batteries which allows to charge the drone for its next deployment. On the other hand the drone will serve the rover as an "extended eye". When the rover cannot see enough to plan the route it is reliant on information from above.

In the scenarios described above we use a various set of different sensors.

Video about the Rover: