Bepi | Make Sense Out of Mars

Drones for mapping and sensing on Mars using swarm architecture. 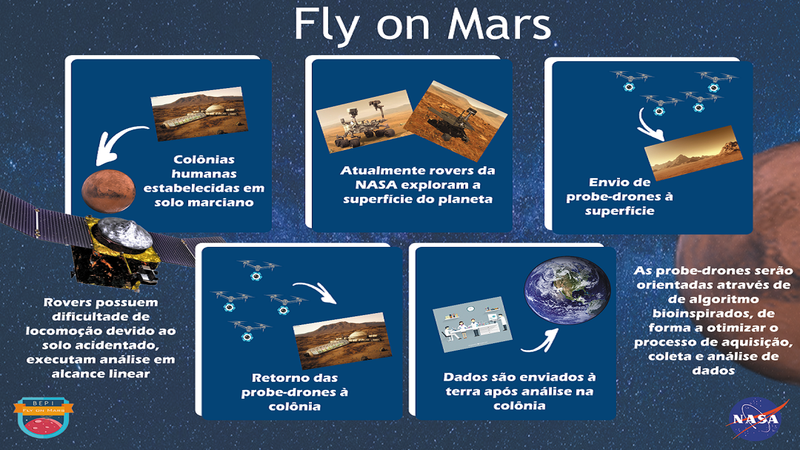 Our project was developed with the assumption that there is a human colony already established on Mars, where humans would monitor and operate, according to the needs and decisions, swarms of drones. Currently, these data are collected by NASA, Opportunity and Curiosity rovers, but there are problems with collecting, such as locomotion of these units due to uneven soil and only the possibility of linear locomotion.

Our group offers a practical and moderately simple solution through drones that have the function of collecting soil and air samples, as well as installing sensors capable of measuring the levels of radiation, pressure and etc., ie all sensors present in the rovers will be present in the drones individually.

These drones are controlled by a central AI, their routes are optimized by a bio-inspired algorithm, Particle Swarm Optmization (PSO), taking into account all factors that interfere with drone traffic as well as their collection. These factors can be radiation, sandstorms and solar energy incidence. All these skills provide the possibility of a wider and faster scan. The use of the PSO will be fundamental for the project to have the expected success, because with it the drones learn to live in society, learning cognitively and socially, reducing errors, failures and also obtaining the best ways to optimize their processes.

After collecting the samples, the drones returned to the human colony to analyze the material by several processes already present in the rovers and also those that these devices could not support, either by complexity as well as by size and mass. The results of the analyzes will be sent to Earth the same way it is currently shipped, but the collection would have the biggest change.

The use of rovers and landers on the Martian surface has been constant since the beginning of the exploration of the planet. Currently Mars has the rovers Curiosity and Opportunity in operation, both of NASA even equipped with high technology laboratories the robotic exploration is still slow due to aspects such as the low speed in which to move and irregularities in the soil of the planet. Thus, it is suggested to use small drones acting together through the implementation of a bio-inspired algorithm, this system will still be housed in a human colony, in this way, it will be possible to optimize the exploration process, making it fast, agile and reducing the costs involved in sending the equipment to the surface of the planet.

This project will impact the exploration on Mars, and any planet solid(rocky) that humans can reaches. This project solve the long distances searchs problem. Dynamizing the frequency and the data diversity. These data cover the chemical composition of the soil, the atmosphere, the intensity of solar radiation and the collision of particles, such as protons and electrons, and atmospheric pressure.

Defining creativity as the ability to bring together areas of knowledge and their applications, the answer is yes, bacause we combine the increasing evolution of drones and their technologies, NASA's response to planet exploration, with Curiosity on Mars, bio-inspired algorithms with the PSO, particle swarm optimization, and apps development with rapid implementation and easy interaction.

The project in its form has never been implemented, but NASA has designs for a drone with mapping function. There is nothing like it on the market.

Our project aims to solve the analysis of characteristics of large areas of Mars through the air, collecting samples and data and taking these to the colonies, thus, increasing the chances of finding interesting places for a mission composed by humans. The inhabitants of the colony remotely monitor and operate the drones, if necessary, receiving in real time the information collected by the swarm individuals.

These missions would have the purpose of making deeper collections that the drones would not have. The only environmental implications are present in the drone's construction phase, because when operating on Mars, its fuel is solar energy. Exceptionally, in case of failure the drone would be in Martian soil.

In terms of existing technology, we have all the weapons we need to tackle the problem.

The plan becomes feasible because the technology used already exists..

The project is based in an drone swarm controlled by an artificial intelligence, this system is based in a 'bee-queen" model with the task of give directions to favorable places another drones. Data is transmitted continuously through electromagnetic waves. The astronauts have autonomia to control the drones according with their decisions and needs. After the collect of material, the drones comeback to the marcial colonie for analysis of data by humans in laboratories with approprietades labs.

Therefore, the project is organized and self-sustaining.

What is swarm optimization?

Swarm optimization is a bioinspired method based on population behavior for problem solving.

According to (Milonas, 1994), the properties of a swarm intelligence system are:

The main research line of swarm optimization is in the societies of ants, wasps, termites, bees and also in human society. Biosyspired algorithm, population-based and metaheuristic algorithms are increasingly being used to solve problems in which traditional mathematical programming can not solve them, because the problem can be very difficult or impossible to solve in the traditional way.

The algorithm chosen for implementation is the PSO, where the social behavior of individuals is modeled, observed in birds and fish, and even in humans. To better understand how it works, we observe that each individual has an experience and is able to estimate the quality of it. As we are talking about a society, individuals are social, so they also have the knowledge of how their neighbors behave. Thus, we have two forms of learning:

The ability to make decisions, after knowing what went right and wrong, both in the individual and in the neighbors, causes errors to be minimized, increasing performance.

In cultural learning we have 3 principles to summarize the adaptation process, according to Kennedy et al. (2001), which are:

Evaluate: Individuals have the ability to sense the environment in which they are and to estimate their behavior on the spot;

Compare: as they are a society, individuals compare their behaviors so that they have a neighborhood reference;

Imitate: imitation is important in human social organizations and is important for the maintenance of mental abilities.

The PSO has a population that is capable of interacting with each other and with the environment and, based on their self-assessment, comparison and imitation, individuals are able to deal with the possibilities and situations that the environment presents.

In this model individuals are characterized as particles flying in an n dimensional space, in our face the number of dimensions is higher than 3, the space, in conjunction with the other adversities of the planet that interfere in the locomotion of the drones.

The metrics for evaluating possible solutions, the best routes in the shortest time while using less energy, are based on two principles, one that connects all the individuals of the population to each other, one that builds a neighborhood close to each individual and those that surround him. Both cited principles are evaluated by a function that judges the admissibility, that is, the optimization of the proposed problem.

2. Initialize at random the initial position (x) of each particle p of P. // P is the function of fitness and the spot of start are the colonie

3. Assign an initial velocity (v) for all particles.

(b) Calculate and best position of the particle pate the moment (pΒ). // First principle

5. Find a particle with better fitness for the whole population (gΒ). // Second principle

(a) Update the particle velocity by the formula:

//Formula for the velocity of the drones in Mars

(b) Update a position of the particular by the formula:

//Formula for the position of the drones in Mars

7. If the end condition is not followed, return to step 4.