Space Bat helps detect the damage that a spacecraft can suffer during its missions and analyzes if these are critical. 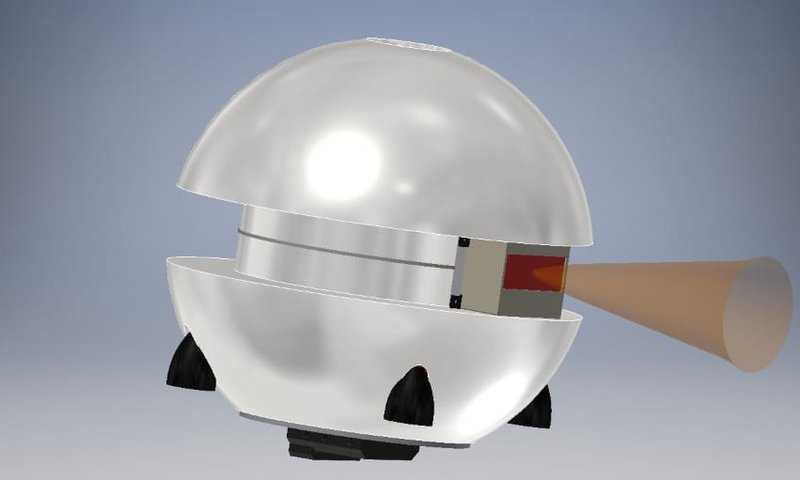 Our proposal is based on an autonomous flying system capable of traveling a spacecraft in search of some damage caused by micro meteorites and orbital debris (MMOD).

Our proposal was inspired by the interspecific relationships of animals, known as mutualism, where animals interact with each other to make a profit, a well-known example is the shark and remora. Our prototype called "SpaceBat" is responsible for conducting a 3D scan of the surface of the ship, in case of finding a risky fracture sends the data of the fracture ordered to the land base.

In past space exploration, the vehicles have been damaged by micro-meteorites and orbital debris (MMOD) that have impacted the crew ships, such as the cases of Apollo 13 and Columbia that after the event have gone as far as to be lost. They did not have an evaluation system outside the ship.

The project consists in building an autonomous flyer conformed by the following components.

3D Scanner, is a LiDar sensor distributed by "GreenValley International", which contains an array of LED emitters, which are lit one at a time in an iterated way, while another arrangement of photoreceptors capture the bounce of the LED light creating a dot matrix with depth and breadth information.

High resolution CMOS sensor located next to the LiDar to capture the affected areas.

The actuators comprise the propulsion system consisting of 4 valves located at the base of the robot, which can be redirected by means of 4 microsteppers and additionally has an inertial moment control system to save fuel while the robot navigates on the spaceship.

The controller to be used for this project will be the Arduino MKR Vidor 4000. Which is a recent proposal of free hardware to perform control by means of an FPGA and SoC embedded in the card.

The brain of the whole system will be an FPGA, which will be responsible for interacting with all peripheral systems.

Once the spacecraft is already in space, it will take off from its base and begin to perform a helical sweep with the surface of the spacecraft, at intervals of one hour, when the robot is not scanning the ship, it will recharge its batteries in the assigned base in the ship.

The following diagram shows the inspection algorithm that the robot will have. In the software will have a file containing the 3D model of the ship in which it is on board, so that in this way a comparison is made between what is being scanned at the current time and the file information where the ship is is in good condition, in case of finding a difference, it is analyzed and characterized as appreciable damage or not based on data provided by NASA. In case the damage is not noticeable the robot will continue to scan the surface of the ship, but if it is found that the damage is appreciable, immediately send a report, with all the damage data to the land base.

Once the amplitude and distance data are obtained, they are stored in the controller to be processed.

When our LiDAR sensor gives us the amplitude and distance data with respect to the mother ship, the controller receives this data and positions the camera at the ideal angle.