We throw the camera in the space (relative speed is 0), rotate the space ship using gyros, and send photos to an AI on-board to detect fractures! NO FUEL!! 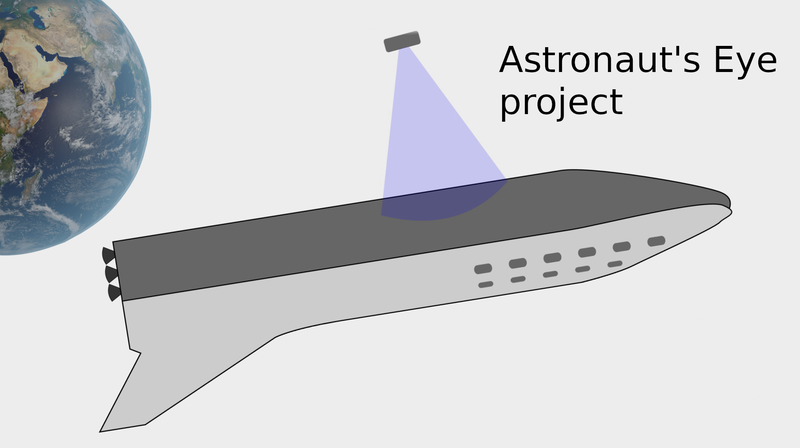 The astronaut's eye project is created as a future safety platform to inspect the whole outside surface body of the spacecraft particularly designed for long space journey to other planets like Mars. The project is to build a reliable system to design, operate and control an autonomous free-flyer working as a surveyor small vehicle to inspect a spacecraft any time during the long journey for damages from Micro-Meteoroid and Orbital Debris (MMOD). The idea of maintaining (FFAS) the Free-Flyer Autonomous Surveyor in a closed proximity adjacent all the time and with equal speed to inspected spacecraft is inspired from the nature from mammals motion attitude of mother and her baby, as example, the whale mother and her baby noticed all the time swimming and traveling beside each other.

Like other industry, the space scientists and aerospace engineers shall review the lessons learned from the previous space incidents like: Apollo 13 – couldn’t see the damages, MIR space station damaged by Progress – 24 minutes to find/plug leak before having to shut the hatch. Columbia – suspected impact to Wing Leading Edge, no sensors or good inspection options. All these because of non availability of enough cameras and reliable surveying technologies to assist and acknowledge the spacecraft crews about the condition of spacecraft outside surfaces. As a result, there are many initiatives have been proposed as solutions to solve this problem by free-flying satellite inspectors like: AERCam –MEPSI –COSA, AeroCube-4, AeroCube-6, AeroCube-7, Cumulos, etc.

In the near future, the manned space missions are expected to start because many space agencies either governmental or private companies have already plans to send their crews not only back to the earth Moon but even to the Mars planet. Therefore, the challenge is to keep the spacecraft and the its crews safe all the time while travelling long term missions by several provisions and safety precautions such as inspecting the outside surface of the spacecraft for potential damages from Micrometeoroid and Orbital Debris (MMOD). In addition, it is risky to use the astronauts every time in case there is a doubt of damages on outside vehicle body not only because of limited mobility of the astronauts to access and see physically all outside surfaces in short time but also it is not acceptable to expose them to surrounding possible cosmic radiation during the journey.

We propose " ASTRONAUT'S EYE " a robust and more reliable system of safety inspection and damage detection to function as a new technology platform project in order to overcome the above mentioned problems. The system consists of the following components:

1- The (FFAS) the Free-Flyer Autonomous Surveyor which:

2- The (THRESHOLD-BAY) located at the middle of spacecraft and contains the following parts:

3- An interface screen and application

to acknowledge the astronauts on real-time about the surveying status and any detected damages on the outside surfaces of the spacecraft. The system processor shall include an artificial intelligence (AI) capability to do images processing and analyzing the data collected such as damages type, location, size, autonomous surveying modes to be selected by the system depending of the many factors: for example, light sources/shadows, surface reflections, view angles, and other cosmic conditions. The astronauts can schedule the frequency of the surveying and times where the system shall complete the task and provide the feedback.

4- As part of quality assurance

in operating the (astronaut's eye System), it is highly important to train the astronauts about the system processes and the sequence of processes in accordance with (SOP's) standard operation procedures. There are two basic processes shall be executed about the spacecraft attitude and control which are:

All space agencies either governmental or private companies who will plan for future manned long journey cosmic missions, for example, from earth to the earth moon, from earth to Mars Planet, and from any planet to another planet. As a new emerging safety reliable system, it will support the future space industry by building-up a more safe missions.

Like every emerging new technology, and because the project in the first phase, there are some obstacles and challenges should be consider in the near future to leverage the project into a more reliable product. These obstacles are briefly listed below:

We are very confident that our project The "astronaut's eye" will satisfy the expectations of space agencies to solve the safety problems to inspect the whole outside surface body of the spacecraft against damages from Micro-Meteoroid and Orbital Debris (MMOD). It is especially created for long cosmic journey not only to earth moon but even perfect to satisfy the astronauts inspecting needs to other planets like Mars. We are very exciting of this innovative project as a reliable system to design, operate and control an autonomous free-flyer working as a surveyor small vehicle to inspect a spacecraft. Finally, the solution is proposed from the beginning for specific goals: low cost, reliability, adaptability, and versatility.