Automating the inspection process of a spacecraft for MMOD impact damages. 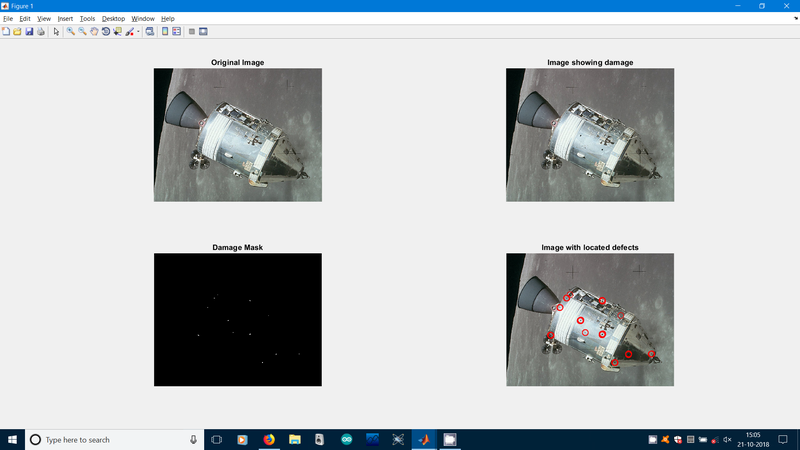 Space can be an unpredictable environment. During spaceflight, spacecrafts are in danger of collision with a lot of space junk which can include meteorites and orbital debris like decommissioned satellites. These objects, when considerably large in size allow for easy tracking and prevention of potential collisions. Things get bad when space junk having minute dimensions (like micro-meteorites) fall in a spacecraft's path. These minute debris, called Micro-Meteorites and Orbital Debris (MMOD), pose a bigger threat to space-faring vehicles than their larger counter-parts

Today, the crew onboard the ISS (for example) inspects the spacecraft for damage by manoeuvring cameras connected to robotic arms which they operate manually. This takes up the crew’s time and is generally slow. Making damage inspection autonomous is the next natural step. Our approach to a solution is described below.

>> An inspection Robot will be stowed away with the spacecraft during launch or it can be deployed later.

>> This Robot orbits the spacecraft at inspection-time.

>> It will have knowledge of its position relative to the spacecraft.

>> It also has a mental map of the spacecraft’s ‘undamaged’ external surface features.

>> At inspection-time, while orbiting, it captures high-resolution images from multiple angles, and, using real-time Image Processing, correlates these pictures with its mental map to locate deformities on the surface.

Reflecting On Our Solution:

>> Our approach might seem similar to NASA’s earlier SPHERES attempt, but where they differ is that, in SPHERES, the captured images are sent directly to the Earth Crew which might not be feasible during long-distance flights, whereas in our approach, the assessment of damage is done on-board.

>> Several such robots may be placed in orbit to cover more area in a shorter time.