Amazoon | Invent Your Own Challenge

Amazoon has received the following awards and nominations. Way to go! 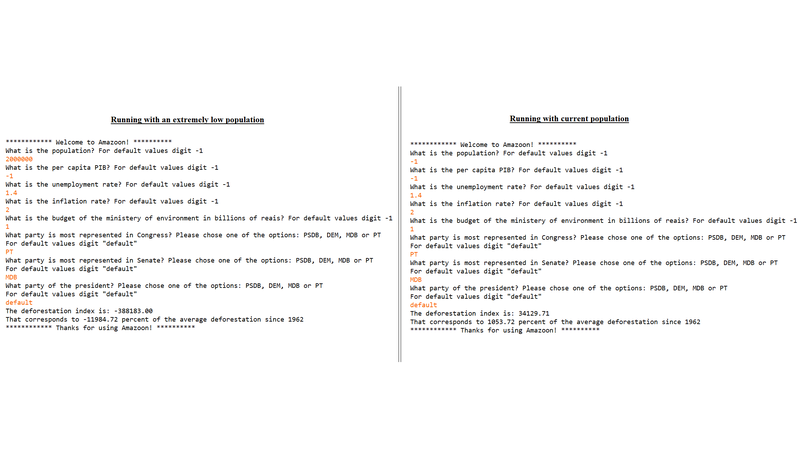 The Amazon Rainforest represents approximately half of the rainforest remained in the planet and it serves as a habitat for an extremely rich biodiversity[1]. It has, for example, 2.5 million insect species[2], over 40,000 plant species and 2,000 birds[3]. Moreover, approximately 60% of the forest is located in Brazil[1].

The Amazon rainforest has been severely deforested over the years.Between 1991 and 2000, the total area of forest lost in the Amazon rose from 415,000 to 587,000 square kilometers, what is equivalent to the size of Greece[4]. The main sources of deforestation if human settlement and the use of the soil for agriculture and cattle raising[5]

In this project, we created a software capable of predicting the level of deforestation of the Amazon Rainforest based on specific data on economy and politics. This software could help:

This project is divided into two parts:

We used EarthData to find pictures of Amazon Rainforest at the first day of each year since 1962. After that, we compared each pixel of the Amazon Rainforest area between two consecutive years in order to create a score of deforestation at each year. For that we used the Java Picture API.

We wrote a machine learning algorithm to predict the level of deforestation based on:

For that we used data from:

Today, there are two ways for the user to interact with the software:

1. By answering the questions at the java compiler

2. By answering the questions at a google form

Moreover, the user can provide the values for all variables analyzed or chose to work with some default values - that is, the values correspondent to the current situation in Brazil.

With the software, you can simulate the socio-political environment in the country and see the predicted deforestation of the Amazon Rainforest based on that.

The canvas of the project is available at: click here

Observation: I did't find a place to submit my code. Therefore, if you want access to it, please contact me and I will immediately provide it through the form of communication you judge the best.