out of the box | The Land Where Displaced People Settle

we made a tool that produces clean water(to be used in agriculture and drinking), reduces air pollution and produces energy for informal settlements. 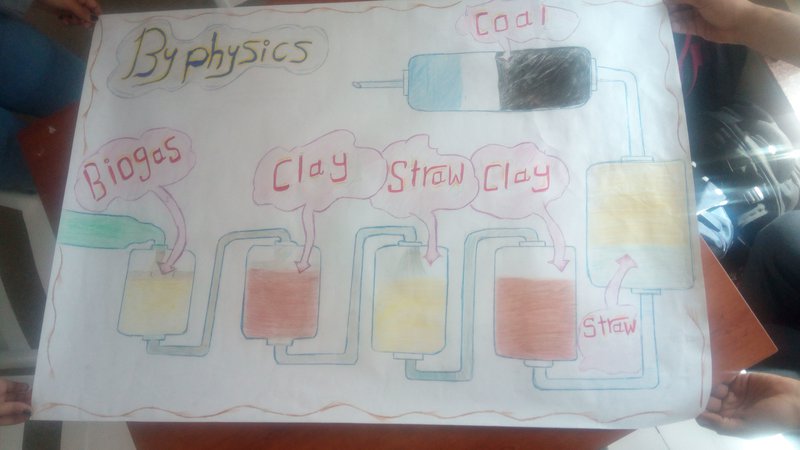 What the world needs now is …..

Informal settlements are areas where Internally Displaced People and refugees construct randomly groups of housing units without permission of the government. (Glossary of Environment Statistics, 1997)

neighborhoods usually lack basic services and city infrastructure. Also, the population of these areas lack the drinking of clean water and some other living requirements such as probable food and clean air. In addition, this population don’t have access to electric power. (Fidelis adiukwu,2014)) huge amounts of Rice, barley and maze straw are burned. This causes air pollution and many health problems.

such places need basically efficient food, clean water and energy. Our design will solve these problems and reduce the air pollution.

Our design depends basically on recycling. The design consists of 5 steps:

the first step consists of corn grinded with 50%(cellulose) which can reduce TSS (total suspended solids) such as microorganisms, bacteria and fungi. Also it can remove some contaminants such as metal ions, dyes, pesticides, and nitrates, via ion exchange or surface adsorption. (1)

The second step consists of corn grinded with 70%

The third step consists of clay (grinded with ratio of 70%) which can remove ions and microbes.

In addition, it reduces Coliforms ratio in waste water (types of bacteria exist in feces of humans). (3)

The fourth step consists of clay (grinded with ratio of 80%)

The fifth step consists of grinded corn with ratio of 90%

by using straw,instead of burning it, we can reduces air pollution.

By waste water treatment ,instead of throwing it in rivers, we can reduces water pollution

In the future, we can use bacteria to decompose organic matter in waste water and produce bio gas(energy), but we must make chemical analysis of water produced to analyze chemicals produced from the decomposition weather toxic or nontoxic and this chemical analysis needs fund.