The objective of this project is to design a prototype model for generating electricity from Soil. As we have ample supply of soil which is a good conductor for the flow of electrons, that is why this project has been envisioned as a cheap electric sourc 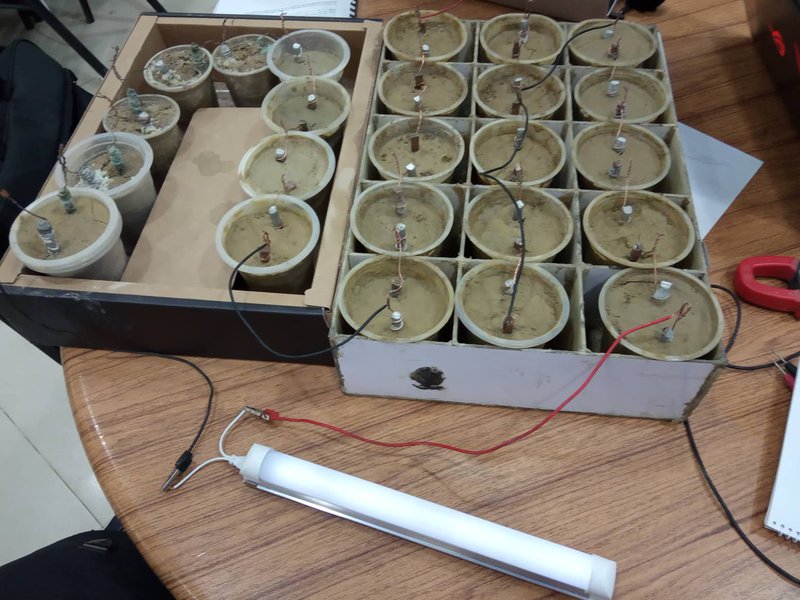 I was invented the mechanism to generate electricity from soil. The soil is one of the source of electricity and it contains a huge amount of electrons. But the electrons always remains stable under the ground because of the potential difference of ground is = 0. So, by making the electrons moving to create an Artificial Electro-Magnetic Field electricity can be produced. I was created an Artificial Electro-Magnetic Field to do force the electrons for moving by using Anode and Cathode as dipole electrode. Here I used Copper as Anode and Aluminium as Cathode. In this case under a container Anode attracts the electrons and the Cathode repels the electrons for its Attract-Repel condition of charges. I used an Anode and a Cathode in every soil container and creates a series circuit by maintaining a definite distance which all of them are connecting with connecting copper wires. Each container creates an individual voltages which amount is above: 0.500 mV per soil container and by adding them in series connection then Electricity is producing. This is a very creative and innovative project. This is definitely a cost effective solution which will be very beneficial for the upcoming future and also solve the electricity problem. It is producing green energy which is totally harmless process and also producing electricity without any kind of environment pollution.

t's a cost effective solution to solve our electricity problem for a better future to the world.

So, if we found on another planet like-MARS the potential difference is not = 0 (Condition: When the ground area is restricted) then most probably there we gets live objects like planet Earth.