We recreated the Golden Record by creating a box that includes several things that we consider distinctive to express humanity in different forms(3D,acoustic,visual) in order to increase the possibility to be understood by other creatures. 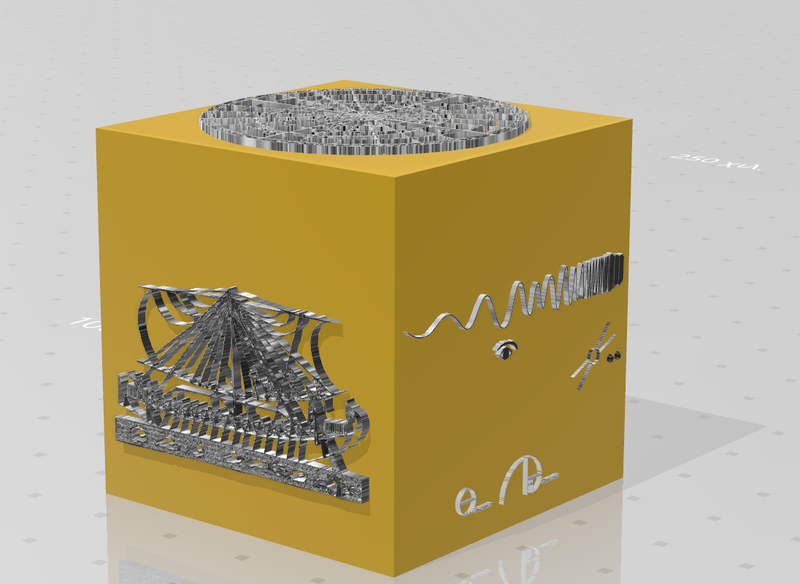 Our team decided to ‘remix the golden record’ by designing a box to be opened by an advanced spacefaring civilization.

Humans always were and will be wanderers. We are explorers of the unknown.

Humanity is driven by curiosity and this is what our cube attempts to communicate.

We used the stars to navigate and we housed our Gods in them.

Our civilisation began with the domestication of nature.

Inside our box extraterrestrials will find seeds in soil ready do germinate and blossom , a symbolic gesture but also a means of sharing the nature of our genetic code.

In an attempt to share our identity and our individuality we also included conserved human DNA and a 3D model of fingerprints .

Space travellers may also find water and a golden record full of human and nature sounds.

Furthermore we included a basic childlike drawing of some animal species and the image of our home planet,by using copper,platinum and indium to express colors.

The internal side of one of the sides is a 3D model of a man and a woman on scale with our SPACECUBE .

In an attempt to find common ground for communications on the outside we placed the electromagnetic spectrum as well as the speed of light and mathematical constants (pi and phi) .