golden hilogram has received the following awards and nominations. Way to go!

We decided to create a new model that fixes those problems and deliver the message in different ways and levels to fill those gaps. We focused on three major domains that are so important all over the journey: The first one considers the way the space cra 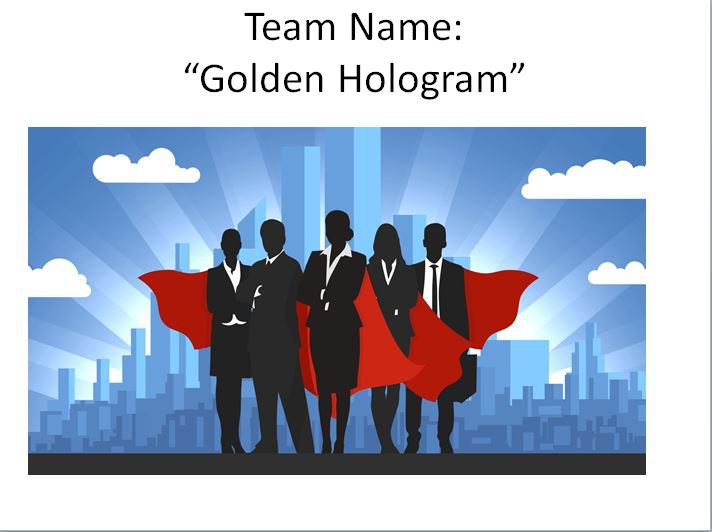 THE CHALLENGE: REMIX THE GOLDEN RECORD

Logo : “To the infinity … and beyond”

The aim of the challenge is to develop a concept for a time capsule with content to educate an extraterrestrial civilization about human culture and our solar system. Trying to find the best ways to transfer data to the space aliens in different destinations and to let them know that there is another life in the universe. This data conveys a message that has information about our civilization and our location to make them able to communicate with us.

After studying the Voyager1 case , we found that it has a lot of weak points such as making an assumption that those aliens are intelligent enough to decode the record and understand the message. The second assumption is that the aliens have all the required senses to get the knowledge from the message, for example , they might not have the ability to see in the same wave lengths that we humans see. The third assumption is that they have the same mathematical system and other sorts of science as us . More than that ,the involved message wasn’t enough and didn’t provide all the necessary information about us . So we find that they didn’t take in consideration all these important points , and the model needs some developments .

We decided to create a new model that fixes those problems and deliver the message in different ways and levels to fill those gaps. We focused on three major domains that are so important all over the journey: The first one considers the way the space craft will function and its components . The second domains is about the methods of displaying the information so that the aliens can get it . The last one considers the type of content that we want the aliens to know about life on earth and the solar system , and what are the things that we don’t want them to know about the human beings to make sure that they will get the right idea about us .

The first domain : The spacecraft :

The external shape of the craft is spherical. This is important to reduce the damage caused by the collision with asteroids because it is more coherent than other shapes and has infinite small edges. It also has two arms using artificial intelligence with the help of the Gas shots coming out from the craft to avoid the collisions or to increase its velocity by pushing the asteroid away . In case there is another body with similar size, velocity and direction we can use the arms to boost the speed. In extreme cases , we can sacrifice the arm for the sake of craft survival. The initial velocity will be the same as the velocity of Voyager {62,140 km/h} , and we will launch it towards a habitable zone . Inside the craft , there are many components :

Artificial Intelligence system combined with machine learning software that controls the arms and the gas shots to adjust the path regularly by using the big data that was uploaded to the system . And analyzing 360º photos with some image processing of the surrounding place where it is.

The craft will use the nuclear batteries to produce and store the power, and supply it to the other devices. We used three different radioactive chemical elements to provide enough energy to the whole mission. The first one should have a range of half-life between 80-100 years, for example: Plutonium – 238, which has a half-life of 87.7 years. The second one should be within the range of {700-1200}.The half-life of the third one should be around 3000-5000. We used this strategy to supply power for the longest possible time for the rest of this journey.

A huge amount of Compressed Gas to control the direction of the machine and change it when needed. This gas will have a certain smell and color which will appear when the gas is tossed. As mentioned before, it will be controlled by the artificial intelligence system. This gas will continue its journey forever and the set of all this gas will make a triangle.

The base is the Earth and the head of the triangle is our spacecraft that is getting more and farther. We can do some calculations with basic mathematics to get some useful information and maybe some intelligent aliens will recognize the pattern by far vision or by smelling it.

The metal box that contains our message is made of Carbon Fiber because it has a high strength to weight ratio , and it has a lot of other useful properties , such as fire resistant , not flammable , high thermal conductivity in some forms , X-Ray permeable , rigidity and corrosion resistance .

The second domain: Methods of displaying the information

We made a variety of methods to make sure that it will cover most of the possible cases. And here are the cases:

“They have similar senses to ours and technically well-developed”:

In this case all the methods that we involved will be much useful, so we make sure they will fully understand us. But there are two methods which are the most helpful in this case: 1. Hologram video that will automatically display whenever the box is opened, and it will show the complete message perfectly with full information and very specific location.

2. A storage device within the box that have information similar to those in stored in the Hologram, but with more accurate details. Also contains exact numbers about the location.

“They communicate by touching:

The helpful methods in this case are:

Those samples present most of the useful information in our message

On an above-mentioned metal “Carbon Fiber “which the box is made of.

“They are well- developed but they aren’t able to see with same wave lengths that we human beings see ” .

The Hologram will be displayed in all wavelengths scales .

“ When the only sense that they can use is hearing “

The Hologram video has music in its background .

We decided to redesign the content with new outline by adding some information that are much more important , simple and clear . We excluded some data that might not be that much important or the aliens might find complex. Our criteria of deciding the importance level of the involved information in the message was whether those information will serve our main aim , which is letting them know that we are here and that there is another existence and what is our location exactly .

There are some information that we shouldn’t because it might be dangerous or might be dispersing or noisy information , which are :

THE CHALLENGE : REMIX THE GOLDEN RECORD.. 1

The first domain : The spacecraft : 3

The second domain : Methods of displaying the information. 4