The Disc of Truth

The Disc of Truth will be a legacy to the Golden Record, harbored by the Voyager. But the Disc will represent all creatures on Earth, plaques of humans as well as animals and trees. It will have motion sensors, more memory, and thus greater reliability. 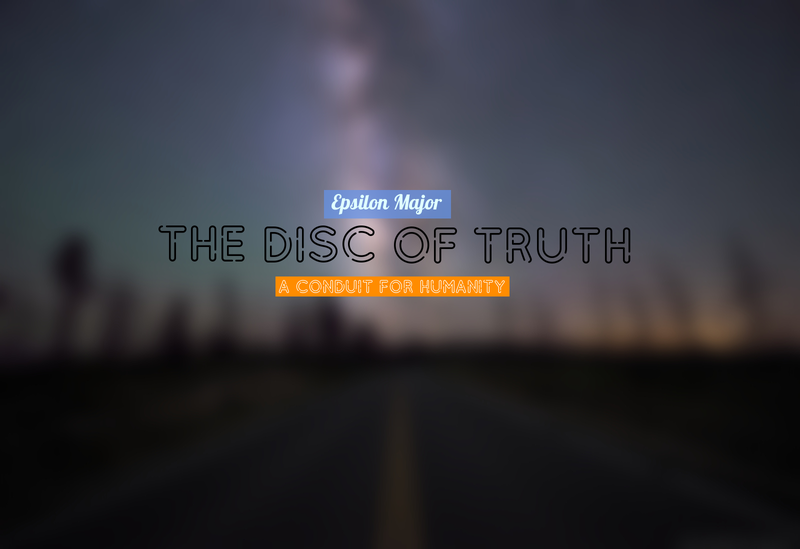 FOREWORD: BEFORE YOU READ THIS ABNORMALLY LARGE DESCRIPTION OF OUR PROJECT ,YOU MIGHT FIND YOURSELF ASKING THE QUESTION: WHY EVEN SEARCH FOR SOME WEIRD-EYED CREATURE THAT MIGHT NOT EVEN EXIST, AND WHY EVEN SHARE OUR STORIES WITH THEM? YEAH, YOU WERE THINKING ABOUT THAT. SO, WE ARE HUMAN BEINGS, WE LIVE, WE LOVE, WE DIE. BUT THATS WHAT IS SPECIAL ABOUT US. FROM THE INCEPTION OF CIVILIZED MANNERS, HUMANS HAVE LEARNT TO SHARE FOOD, THOUGHTS AND EVEN EXPERIENCES.

THIS INNATE FEATURE OF OURS IS UNIQUE. WE CANNOT LIVE WITHOUT SHARING OUR EXPERIENCES WITH OTHERS. LETS FACE IT, IF SOME GOOGLY EYED CREATURE FINDS OUR STORIES IT SURE WILL BE INTERESTING. SPREADING OUR STORIES ACROSS THE COSMIC OCEAN IS WHAT MAKES US FAR MORE SPECIAL THAN ANY OTHER BEINGS, DISCOVERED OR UNDISCOVERED. SO, TAKE A DEEP BREATH, AND SEE THE THINGS THAT WE WILL PUT INTO OUR DISC OF TRUTH. THINK OF EVERYTHING THAT MIGHT HAPPEN. VISUALIZE THE WEIRD CREATURE, AND EVERYTHING WITHIN THEM. WE WERE BORN TO EXPLORE, VOYAGER-1 IS NOT OUT THERE, IT IS WITHIN US.

PERHAPS ONE DAY, WAYYY LONG AFTER YOU FINISH READING WHATS GOING TO BE INSIDE THE DISC. SOME ALIEN WILL LEARN OF OUR STORIES. AND THE QUESTION ASKED FOR CENTURIES WILL FINALLY BE ANSWERED. "ARE WE ALONE?".

CONTENTS: (each '=' is a different point)

=Vocals of a grown man and woman to represent adulthood. Vocals of a boy and a girl to represent childhood. Vocals of chosen animals, like dogs and cats to represent all the animals. (20MB of space) =Sounds of Planet Earth, including the wind, seas, stirring of trees and crops, natural disasters etc. (10MB of space) =Influential music across all ages, one from each genre, Rock, Pop, Electric etc (70MB of space) =Vocals of crying and laughter, with sounds of the heartbeat (inspired from the Golden Record) (10MB) =Sounds of other Planets for ease of locating Planet Earth in the Solar System (for smarter civilizations) (10MB) TOTAL= At least 120MB of Memory Needed onboard. PLAYBACK= ANALOG AND DIGITAL, ACTIVATED FROM MICROSPEAKERS IN THE DISC DUE TO MOTION SENSORS INSTEAD OF THEM PLAYING CONTINUOUSLY.

=A picture of a Man, Woman, Boy and a Girl. *additonal picture of a baby and a fetus in a woman (inspired from the GR) =An anatomy of a Human Being (To be precise, the Vitruvian Man) =A picture of a busy city, with commuters upon the roads. =Picture of a tree, namely the General Sherman, for representing the flora of Planet Earth. =Picture of a dog and a cat. =Picture of a Fetus (inspired from the GR) =Pictures of the Moon Landing. =Pictures of ships ,cars, aeroplanes, trains, motorcycles and rockets. =Pictures of the Heliocentric Model (inspired from the GR) =Miscellaneous Pictures =MOST IMPORTANTLY, Pictures of our view of the Universe, of the Hubble Deep Field, The Pillars of Creation, Distant Explorers like New Horizons, Voyager-1 and Voyager-2, Gravitational Fields etc =IMPORTANT: Pictures of the evolution of Human Beings, the famous picture of the transition from Apes to upright Humans, with a scale below to represent millions of years.=Picture of the Hydrogen-Oxygen bond (H20). TOTAL= AROUND 150 Pictures, all of them stored in a special case inside the Disc. Fine-coated with absorbents to survive both high and low temperatures. PLAYBACK= ANALOG, can be accessed after opening the case of the Disc. PREDICTED WEIGHT= 100 Grams.

=Will be stencilled on the wall of the "Epsilon" spacecraft, the palanquin for the Disc of Truth: "Hello, Friends. Hear us now, we are the Human Beings. Amidst the chambers of this spacecraft, there lies our stories, our tales and our journey through time and space". =Greetings will also be implemented in the acoustics, with "Hello from Mankind" being played in the 10 of the Most spoken languages of the world. WILL TAKE UP ABOUT 5CM OF SPACE ON THE MAIN PLAQUE.

HERE IS THE DETAILED DIAGRAM: (please note that "sending back to earth" under the Microprocessor actually means sending the final transmission back to Earth) https://imgur.com/a/bTjLGd0

=The Disc will be made out of Aluminium covers, (shaped like a hollow tablet), the pictures will be contained inside these. Binary instructions for the Acoustics will be embedded inside memory cards connected to a microprocessor which will detect motion through actuators. If any motion, thermal signatures are picked up, the sounds will play automatically until the tracks are all played. If signatures are picked up repeatedly in short intervals, (10 minutes) an actuator will eject the Disc of Truth. If motion detectors detect any kind of entities grazing the Aluminium framework of "Epsilon" repeatedly, the Disc of Truth will automatically eject, but will still be attached to the spacecraft with a tether unless other Beings cut it out (the sensor will begin the hibernation approximately 30 minutes after launch). Total amount of memory required is equal to that of a smartphone from 2006. Spacecraft trajectories will remain unaffected. Information will be sent to Earth approximately 3 minutes after the Disc of Truth has been opened up. Least power will be used.

For playback long after the initial procedure of the ejection of the Disc, the sounds can be replayed using the pits and bumps on the Secondary Plaque with the stylus. Instructions will be included in images.

Main power source will be Radio isotope generators, an efficient way to ensure the processors and sensors keep on working (will produce an immense amount of power) The concoction of Hydrazine will be used as a Fuel for the Epsilon spacecraft.

Lastly, the storage unit for the Acoustics will be made up of Silicon Dioxide crystals allowed with Bismuth (longest half life, compromised price) and Copper for long durability. Data will be stored as binary, and will be converted to analogue by an ADC as directed by the motion sensors.

Protection from Outer Space Hazards: simple programs will guide the thrusters, sensors using 0.001A of electricity every 4 hours will provide a constant feed of temperature, pH levels (if applicable on an exoplanet) and asteroid motion. Once in the Kuiper Belt, short pulses of sound similar to the SONAR can be used to avoid obstacles in Outer Space.

As of yet, we do not know how the Alien beings will see or hear us. But since sight is one of the major senses, we must take into account the fact that the Aliens can see. So, to transmit the data, visible light will be used as an advantage. For example, if the Disc is found by an Alien on its planet, the Alien is more likely to get completely adapted to its environment. Since Light travels in straight lines in majority of the Universe, the Light in the Alien Planets can reflect off the analog images and thus enter the sights of the Alien.

Now for the sounds. The Sounds embedded in the Disc will be a major impact upon the judgement of the Alien. It will just be bad luck if a deaf Alien gets his hand on the Disc, right? So, in the secondary Plaque (behind the storage unit) (diagram attached), the data will be stored in the average pits and bumps, with a stylus inspired from the Golden Record on the Voyager. Since the problem of Sight will be apparently fixed, a set of visual instructions on how to decipher the data can be implemented, and ideas of the frequencies of the sounds can be perceived by the Aliens.

1) Alien comes into sight. 2) Motion sensors detect repetitive motion. 3)Acoustics are played. 4)Alien is curious. 5) Alien tries to decipher the Disc, figures out how to open it from the diagram. 6) Alien sees pictures. 7) Alien finds Secondary plaque and cuts the tether. 8)Alien reports to Higher officials. 9)Officials will either plan to invade Earth or make friends. 10) Human beings will smile.

"The thing is, the alien civilization has been told to be advanced, thus they can count, since basic arithmetic is needed to calculate and the basics of our Universe. However, examples of the Four Operations will also be engraved on the Main Plaque, and that should be enough"

Since our challenge was to create content that stands the test of time and must be able to be integrated into a time capsule, the content must be given the most attention. A general overview: As of now, the Disc of Truth contains Sounds of Human Beings, Animals and Natural Sounds, along with different types of music. An Anatomy of the human body was given. The picture of the transition of apes to human beings was implemented. Pictures of busy cities. Pictures of our place in the universe, the solar system, Hubble Deep Field etc.

Out of all these, here are the most important content that will stand the test of time: Voices, Nature, Religion, Knowledge, Evolution and Human Anatomy. Voices of human beings will stay constant. The sounds of Nature will do the same. To represent Religion, pictures of each of the cover pages of all the Major Holy Books will be printed. Knowledge of the Universe will always be the same such the Hubble Deep Field, will always exist. We cannot change what already happened, so Evolution will play a major role. Human Anatomy is perhaps the most important, since it describes our framework (The Vitruvian Man will play an immense role since it describes measurements and the human anatomy relatively).

Restrictions, there SHOULD be no restricitions upon the content we shall be installing into the Disc. Because hey, it is named the Disc of Truth, and truth shall we say. But to at least avoid some large scale invasion of aliens, pictures of human destruction should be avoided. But there can be no more restrictions, because we can lie to ourselves, but we cannot lie to the cosmos.

All of these are the best we can offer. Perhaps things will not be as they were, but these will always be the same. Aliens will read our history and these will be the contents that relate to our very roots, both science and metaphysics.

CONCLUSION: NOW THAT YOU HAVE FINISHED READING IT, WE MUST TELL OUR STORIES ACROSS THE COSMOS, TO KNOW IF THERE IS SOMEONE WATCHING OR HEARING US. BUT NOT ONLY BECAUSE OF THAT, BECAUSE OF OUR ETERNAL CURIOSITY TO KNOW THE STARS, WE MUST SET SAIL TO THE MOST DISTANT STARS, TO LET THE WHOLE UNIVERSE KNOW OUR EXISTENCE. THE DISC OF TRUTH, LEGACY OF THE GOLDEN RECORD, AND EPSILON, LEGACY OF THE VOYAGERS, WILL HARBOR OUR STORIES. GEARED WITH MOTION SENSORS, AND ENOUGH HYDRAZINE, EPSILON WILL GO INTO THE DEPTHS OF THE UNIVERSE, TURNING BACK EVERY NOW AND THEN TO LOOK BACK AT THE PALE BLUE DOT. THERE WILL BE LESS SCIENTIFIC INSTRUMENTS, SINCE THIS IS SUPPOSED TO ORIGINALLY BE A TIME CAPSULE. BUT ONE DAY, PERHAPS, IN THE FARTHEST FUTURE, AN ALIEN WILL COME CLOSE TO THE CRAFT, AND FIND OUT THAT A GOLDEN TABLET JUST HURLED ITSELF OUT. CURIOUS, THE BEING WILL READ OUR TALES, THE BEAUTIFUL HISTORY OF THE HUMAN BEINGS. WE HOPE YOU LIKE OUR PROJECT. BEYOND THE FARTHEST REACHES OF THE UNIVERSE, THERE LIES INFINITY.

EXPECTED MISSION TIME: (AFTER RUNNING OUT OF FUEL AND DEPENDING ON GRAVITATIONAL PULLS) 3 BILLION YEARS FROM NOW (Taking into account Space debris damaging the framework and other outer space hazards, it will be SOME luck if some Alien manages to destroy the craft with a laser or something :'( )

https://pub-lib.jpl.nasa.gov/docushare/dsweb/Get/D... (for information on contents on the Record)

https://www.babbel.com/en/magazine/the-10-most-spo... (for spoken languages in the world)

https://voyager.jpl.nasa.gov/golden-record/ (for the Golden Record)