Star-tiflette | Mission to the Moon!

A mission to explore the lunar pits and discover their potential and origins.

The Moon is for the moment the only place where man has been able to set foot outside the Earth. Working and reflecting on issues related to lunar exploration is therefore very exciting and that is why we have chosen the "to the Moon" challenge.

In recent years, the moon seems to have become the breeding ground for a future human base. This base can only be built if it knows its environment and offers a safe habitat to its occupants.

This base requires a preliminary study of the soils, rocks and water on the Moon. In addition, our natural satellite has no atmosphere or magnetic field, which requires the base to be protected from meteorites and radiation.

On the surface of the Moon, there are different natural wells called lunar pits which have the particularity of being partially closed and therefore offering areas to protect naturally from the dangers mentioned above.

They therefore offer interesting advantages to a lunar base that could occur in their design of shielding against meteorites and radiation.

The exploration of a lunar pit is very constraining, its depth (several tens of meters) makes all exits difficult. However, the recessed cavities on either side of a pit are not accessible from the surface. It is therefore necessary to send a vehicle inside.

Several scenarios can be considered. A moon landing on the surface or at the bottom of the pit. We see that in both cases, a landing with high accuracy is required. However, in the case of a surface lander, an additional module must be lowered into the hole, thus assuming a crane and limiting the lander to a transport role. A landing in the pit is certainly more risky than on the surface but allows more scientific equipment to be carried on board the lander, which no longer parks at the edge of the pit.

In order to make the most of the possibilities offered by this mission, we have decided to use the second scenario.
By associating the lander with a rover controlled from Earth, it is possible to analyse the pit in which they have landed.

It will be impossible to leave the pit once it has been placed on the ground, so the mission will be short and must be accessible at the lowest possible cost due to its limited range.

In order to be able to communicate, the landing site must allow a connection to the Earth despite the depth of the pit. It must therefore be on the visible side of the moon and directly oriented towards our planet. The site in Mare Tranquillitatis offers these conditions and the many images of LRO give us a good preliminary knowledge of the site. 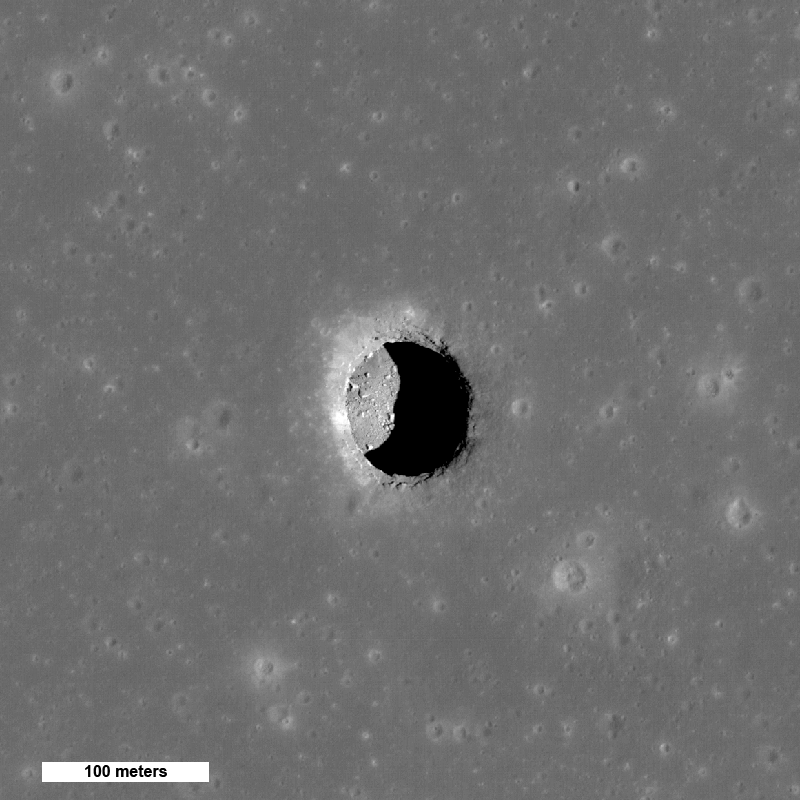 First, the lander will have to carry out the topography of the pit in order to allow the rover to have a better knowledge of the terrain. We will therefore embark on board a LIDAR to make a 3D model of the pit.
In a second step, the rover will be able to start his mission, moving towards strategic and interesting points that will be determined by means of cartography. The rover to carry out studies on rock as well as on frozen water. This is why it will be equipped with a laser spectrometer, an optical camera and a radar to analyze the ground.
The data thus collected will be transmitted to the Lander, which will then act as a relay to Earth.
If communication is not possible, the data is saved until a positive alignment is achieved.

These instruments will therefore make it possible to:

To enable this mission, different technologies must be developed, which may be used in the future for other missions on the Moon or Mars.

So the objectives are:

Characteristics of the mission:

estimate based on a similar mission

In order to keep the cost low, the mission could be launched as a second payload on another flight or we could use a heavy launcher to multiply the landers and rovers on the surface of the Moon and therefore the number of pits explored.

This simple and low-cost mission allows us to restore the lunar mission using the new 21st century technology and allowing a more in-depth study of the soil for more ambitious missions.