Space Painters has received the following awards and nominations. Way to go!

Ever wondered what would happen, if you sent Van Gogh to space today? SK[AI] is a platform that allows you to view space from the standpoint of the artistic giants from previous centuries with layers of data that represent various aspects of the earth. 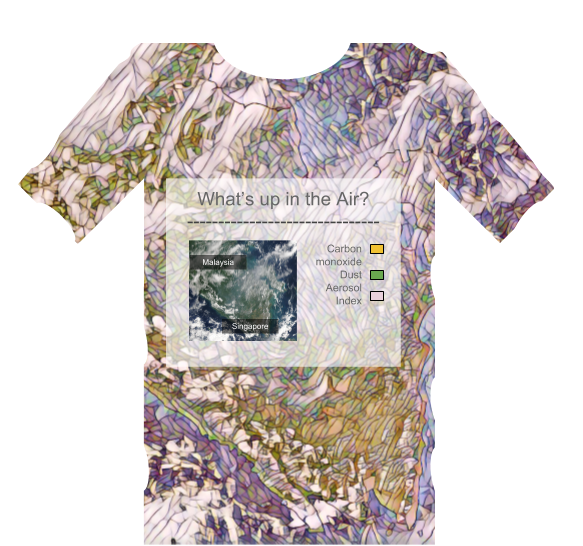 If you threw a lobster in a pot of boiling water it would try to escape, but if you heat the water slowly, the lobster would die slowly. Such could be the fate of humanity, whose ignorance towards climate change might one day be fatal for us all. Statistically, here's where we stand for today:

Thus, our approach of artifying the earth is one that allows people to highlight these catastrophic changes to our environment through unique artwork that highlights data and imagery from NASA Worldview that matters to each individual in a physical form that appeals to them. Enter, SK[AI].

Project Implementation
Nasa provides (https://worldview.earthdata.nasa.gov/) an easy way to visualize worldview GIBS data in your browser. At the same time, the addition of certain layers such as carbon monoxide and dust layers shows respective carbon monoxide and dust levels on the same map through visualisation. Using worldview earth data and imagery we can get a satellite image with added layers for the user's location or from a specified area on a page from our app.

We then used Convolutional Neural Network (CNN) to transform the input image to stylised output image. The perceptual loss function have been used for training the VGG16 CNN. The CNN takes two images, where the first image is input image and second image is a painting style (for example Van Gogh or Salvador Dali style). Feed forwarding these two images on trained CNN outputs transformed image based on painting style.

These images were used to generate various custom merchandise through an easy to use interface found here: https://skaipainters.herokuapp.com/ (optimised for mobile) and intends to act as a prototype of a platform for all to share and sell their designs for earth-aware merchandise in the future!

As for the picture generated, we attached an example and actually printed it to showcase the simplicity of implementation at the end of the video as a reference. The original image of the Earth is shown in the middle of the t-shirt, as well as the information in each colour that represents each layer used from worldview: Carbon monoxide, Dust, Aerosol Index. The t-shirt itself is a representation of those layers that showcase polluted air with the custom style selected by the user.

Short description of our github repo: The interface can be can be run from the index.php and the machine learning model is located in style_transfer folder. All code is licensed open source with the MIT license: https://opensource.org/licenses/MIT

In order to run the Machine Learning style transfer, the following command should be called: