Launch Mapper | Do YOU Know When the Next Rocket Launch Is?

The Challenge | Do YOU Know When the Next Rocket Launch Is?

IntuSpace: Painting stars in the sunset

Have you ever wanted to see a rocket launch in person but not sure where to go or how you'd view it? IntuSpace is an app with VR elements that helps you to attend rocket launches in person or watch live on your phone wherever you are 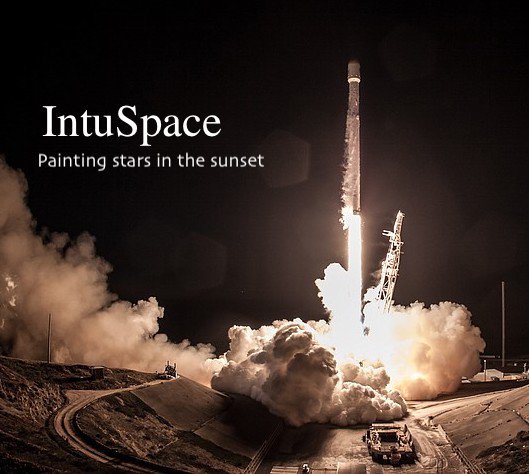 The way that we watch TV is changing. From live-streaming sports, major world events and more on social media, to pre-recorded TV shows we have the power of choosing how we watch TV and where we can watch it.

People want to be close to exciting events, regardless of where they are in the world, and even if they aren't there in person they still want to be able to feel the adrenaline, awe and atmosphere as though they were there.

IntuSpace is a mobile app that allows people with an interest in space and rocket launches, to plan trips to see a rocket launch take place in person. Users can select a rocket launch site that they want to visit, choose a hotel from a list of hotels available in that location via the app, book a room and then book a flight/mode of transport that will take them there.

Users who plan a trip to a rocket launch site will receive:

For users who aren't able to make it, IntuSpace has VR elements which give users a live 360-degree view of the launch site itself and when the rocket launches - as though they were there.

We are budding, young entrepreneurs who have spotted the lack of interest in astrophysics among the younger more vulnerable generation, as a consequence of lack of education. Today's actions influence tomorrow's beginnings. The UN looks to improve the studies of those who have the ability to shape the future . Currently that refers to all young people in the world. Could we really look into the eyes of a 10 year old, and turn their dedicated, science loving hearts down?

Intu Space came up with the ideal solution: Rocket Launching. One of the first air -vehicles, that toddlers are taught about. We all remember those nursery rhymes that sang: 5, 4, 3, 2, 1, Blast Off! But many young children lose their passion in this subject, that allows a range of broadening careers. We wish to encourage the architects of tomorrow to regain a love for the Earth and space through our website. This site was created by young people for young people. We understand the interests of the younger population, and with that in mind, we adapted our site to allow the 10-18 year old scientists to develop their learning of the outer world.

As young scientists develop their love for this field of physics, they are more likely to take up a career in research of the Earth and its surroundings. As a result of the older generation's CO2 emissions, the Ozone layer of the atmosphere is thickening and trapping the sun's heat rays in the Earth. Hence, the climate is rapidly escalating, leading to droughts, as well as the melting of polar ice caps that lead to less land over sea level. If action is not taken, the struggle is placed upon the younger generation and generations still to come. Young scientists can join the research to find a solution to our lives and identify new homes in different planets. One small step for IntuSpace, one rocket flight for a young scientist.

Our site stands out because our app is free for users so we have decided to make revenue through third parties paying a quarterly fee to be featured in the app’s list of ‘Our recommended places to stay,' by adding in app adverts. Quarterly fee for users who want to subscribe and get all-areas access before a rocket launch happens. This can include footage of astronauts talking/doing their prep on board before rocket launch. Some third parties include: Expedia, Trivago and Sky Scanner(Flights). We use these third parties to help the users book travel and journey to the launch sight.