Atom Team has received the following awards and nominations. Way to go!

The electronic sensor system of the spacesuit is a set of sensors that control medical records, the astronaut's emotional state, and a display for providing information of system indicators.

The spacesuit is a rather complex, multi-level system, but at the same time structured. In many aspects, it is vital to visually see the status of the spacesuit indicators, especially the pressure and the amount of oxygen.

It is one of the system’s innovations that includes an astronaut's tracking system consisting of a heart rate monitor and a tonometer. 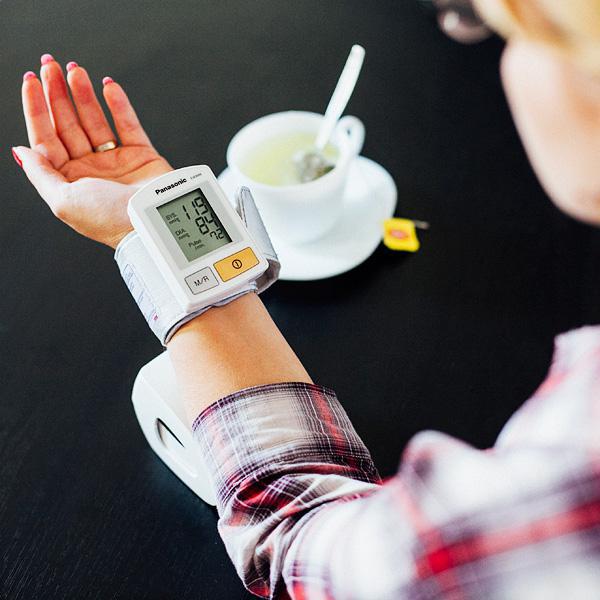 An example of a tonometer that can be installed in a spacesuit. (Of course, such a huge scoreboard should not be there)

With the use of this system, it is possible to register various mental astronaut’s disorders that can manifest themselves over time due to the influence of an insulating medium.

Consider the work of sensors on the example of an alarm condition.

As in the case of most mental disorders, no one could say for sure why anxiety clings to us - it is known too little about the brain to speak with confidence about the reasons. Most likely, several factors are to blame - from the omnipresent genetics to traumatic experiences.

The heart rate monitor can register deviations from the normal heart rate, and the system, based on the data obtained earlier, will be able to process the data and help the astronaut using the prompts method.

Also, a cluster of medical sensors (heart rate monitor and tonometer) can record deviations in the astronaut's health, for example, measures pressure and pulse, which will monitor the condition of the heart and the circulatory system in general. 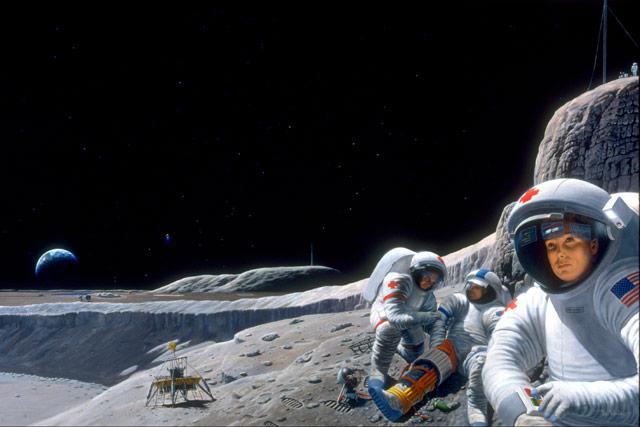 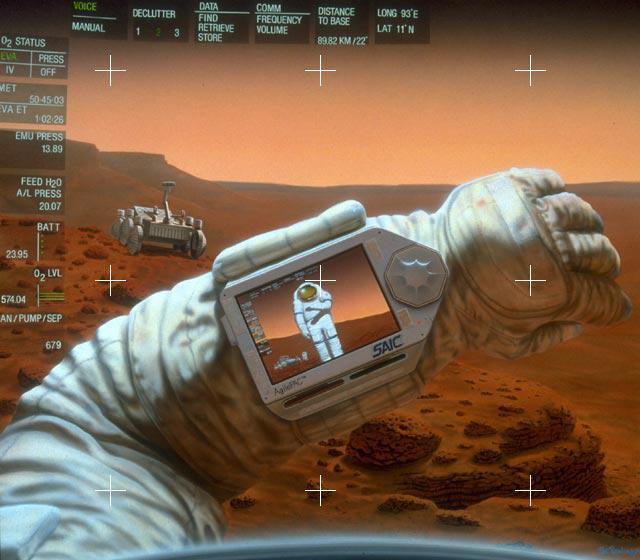 The electronic sensor system of the spacesuit is equipped with a display for displaying the collected information from the sensors. Information is systematized and data is sent to the display screen, which is located on the inside of the helmet (an astronaut's helmet).

After all the data from the sensors was collected, all information is sent to the display located on the inside of the pressure helmet. It ensures the availability and image clarity of the indicators of all sensors without loss of quality and saturation of the display. The display is located at the bottom of the pressure helmet. It has the following structure: a miniature reflector and a prism. From the miniature monitor, with a resolution of 640 × 480 pixels, through a small number of optical elements, the image is projected on the screen. The prism serves as an optical element that directs the image to the screen.

The display has a shutdown function for switching to mechanical information output devices, this provides certain advantages:

Space is an aggressive environment, so timely monitoring of indicators is very important. A structured dashboard simplifies the process of monitoring space suit performance. The display helps the astronaut to monitor all indicators in a convenient form, which radically changes the perception of information and the performance of the astronaut, it is important that at the same time the astronaut saves a lot of time.\ 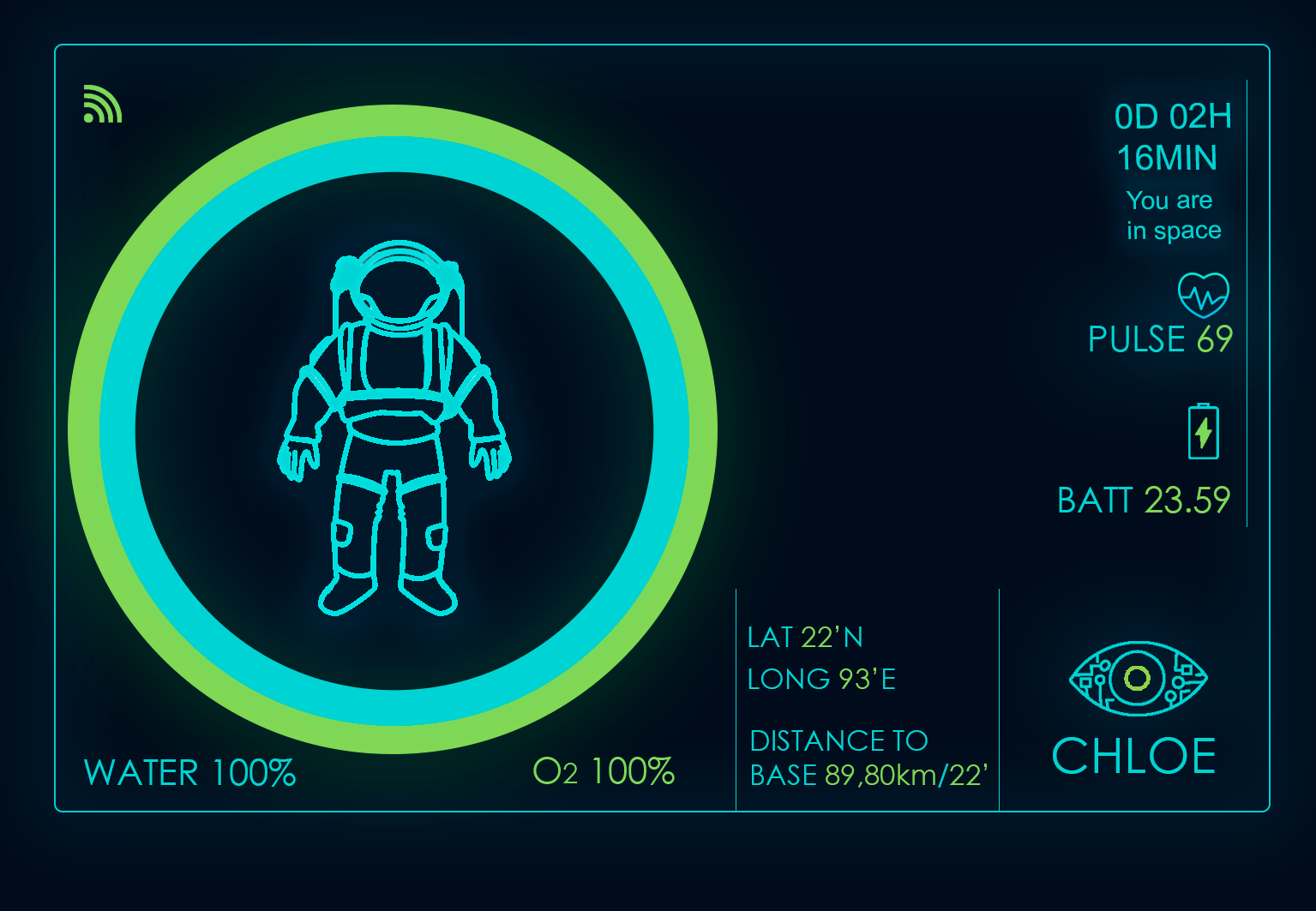 Chloe - voice assistant that is ready to help the astronaut with his work at any moment. All the important information should be not only showed on the display but also duplicated as an audio message. For convenience, the voice assistant called “Chloe” was introduced into the electronic sensor system of the spacesuit for the perception of information.

“Chloe” has a female voice with a British accent. The introduction of a voice assistant meant to be the release of an astronaut from unnecessary actions to assimilate vital information. “Chloe” has the following features:

Example: The amount of water in the tank is close to the allowable minimum.

Another innovation is the damage control system. In modern suits, one of the layers is a layer of gas. It performs the function of maintaining the shape of the spacesuit during flexion of the joints. Our idea is to divide the suit into conventional zones and locate a pressure sensor in each of them. If the suit is damaged, and depressurization will occur when the pressure sensor will detect a decrease in pressure in the zone of damage. After that, it will display the deformation on the spacesuit model.

It doesn’t take much creativity to come up with some overly complicated contraption, but in order to make something elegantly simple, we need real geniuses.