Space Quad is an innovative solution for damage detection on the International Space Station with its advanced sensor technology and autonomous systems. 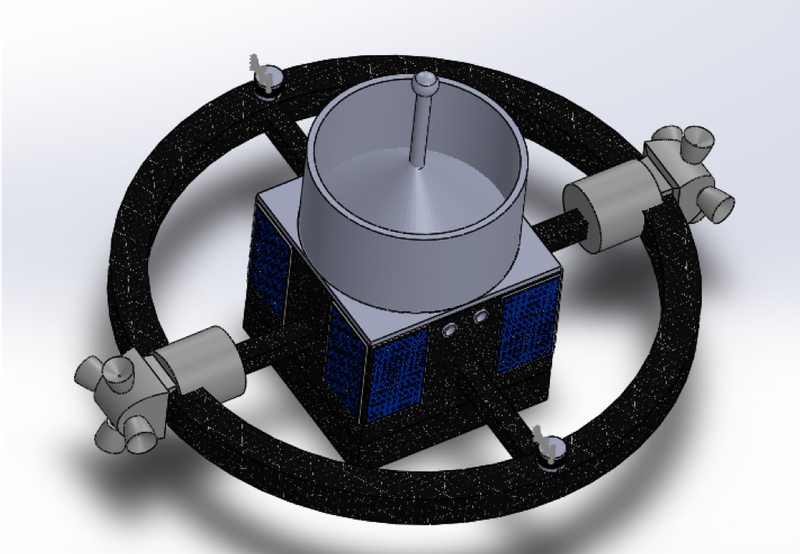 The Space Quad platform has been designed with reusability and safety as top priorities. It has also been designed to make the most of the current technologies and tools used on the ISS. This Unmanned Space Vehicle (USV) can dock with the Canadarm using its conventional docking port and then uses its RCS system to navigate to otherwise unreachable areas, leveraging its power reserves and generation based on solar cells and lithium-ion batteries to extend the station self-diagnostic tools. The platform has been designed to reach similar speeds as the Canadarm (0,6m/s) and has an array of lidar systems to detect and avoid collisions. The on-board control system also makes use of its optically calibrated inertial complex, comparing its dynamic features to known position of the ISS to generate a safe trajectory. Finally, the USV can be docked with the station using the Canadarm, allowing it to replenish its fuel cells and power.

Indicatoridae are indicator birds used by humans to guide them to bee hives . The birds search for the emplacements of the hives and later transmit the information to man through a special singing tone . Inspired by them , the unmanned space vehicle searches for the emplacements of the space debris and damages on the International Space Station and transmits the information to the ISS’s astronauts . The astronauts will then share the data with Mission Control on Earth .

The Space Quad platform is controlled autonomously using a combination of proximity sensors and modelized trajectory planning. There are two proximity lidar systems installed on the USV, allowing it to have a complete view over its surroundings. The platform has internal linear and angular acceleration sensors, allowing it to position itself relative to the space station’s referential system. To account for the drift that may be created in the positioning system, a laser calibration module using retroreflector positioned on the space station has been designed. The trajectory of the Space Quad platform is generated using all the positioning data to ensure a complete coverage of the station’s surface with our analysis tools.

A liquid form of hydrozine ( N2H4 ) and dinitrogen tetroxide are used as propellants for the unmanned space vehicle . The fuel ( hydrozine ) and the oxidant ( dinitrogen tetroxide ) are stored in fuel tanks inside the USV . Two fuel lines are connected to the combustion chamber through the injectors . Since the dinitrogen tetroxide is used as a catalyst , the atomization and the mixing of the products will trigger the decomposition of the hydrozine . This highly energetic reaction is then directed to one or many nosels of the RCS .

The platform can navigate while being docked with Canadarm. A docking station on the drone was added so that some local analysis may be performed without using propellant and to allow the Canadarm to oversee the docking procedure.

Allows for independent energy regeneration. When in low power consumption mode, it is possible to recharge the batteries in preparation for high power requirements maneuvers and data acquisition.

The Space Quad handles custom mission planning depending on the requirements. The mission time will vary depending on the range and the data density required. Live feedback status of the drone is shown on the mission software, which ensures everything is going as scheduled during the mission. It is possible to have a manual takeover is necessary. Three autonomous controllers are installed for redundancy and high reliability.

Live data transmission to ISS with frequency based transmission. This technology is proven and works well in different environments. Data processing on ISS to reduce the payload size and enables to have more powerful computers do the processing than on board. It is also possible to take control more easily of the data processing. It is also easier to make software updates and to add custom functions to the image analysis software.

The drone will fly at 15-20 m from ISS. This is close enough for detailed images while being a safe distance for manual takeover. A distance a little further reduces missions time but reduces the quality of the data received. With high resolution sensors, a 15-20 m distance is totally acceptable and make possible to get data from damage as small as 0.5 mm in diameter.