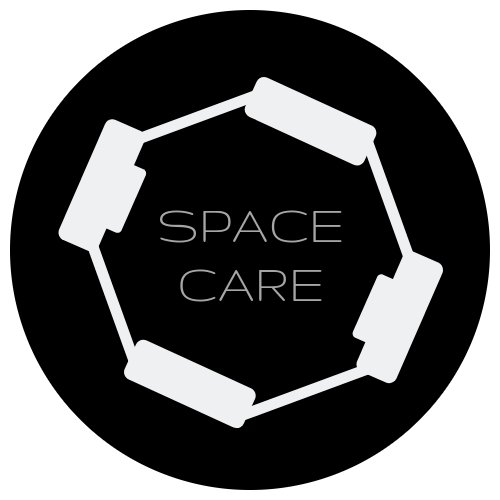 Our idea responds to the demand of autonomous inspection of a crew vehicle from the outside. Detecting damages caused by impacts with micro-meteoroids or space debris is one of the crucial points for future manned missions.

Nowadays, this procedure is carried out by time consuming activities as robotic arms inspections or EVAs. Making these procedure faster and more autonomous is the point addressed in this project.

Our concept finds its inspiration from the behavior of some predators which are used to circle their preys to get the best moment for the attack. Likewise we have to observe our “prey”, the damage, and capture it.

‘SpaceCare’ is an inspection vehicle which is actually composed of 4 different S/C gathered together by means of flexible composite members.

After the release from the crew vehicle, the different parts are separated using the flexible arms, and the vehicle assumes a closed-ring shape. It’s then set in motion around the main axis of the crew vehicle. In this way, it can scan the whole external surface, detecting damages thanks to the onboard cameras.

The blocks are divided into two instrumentation blocks and two control blocks. The former are 3U cubesats containing all the instruments, sensors, batteries the on-board computer, while the latter are specifically designed blocks containing the maneuvering thrusters, the propellant tanks and the deployable arms. The system relies on the capability of getting high-precision maneuver and 3-axis attitude pointing.

Not all the aspects has been treated during the duration of the Space Apps 2018 event, but we think that an advanced design of ‘SpaceCare’ will supply an instrument for fast inspection, both scheduled or before critical operations, for future manned mission.

Source for the project can be found at:
https://gitlab.com/faraco.nic/spaceapps2018milano_spacecare

Thank you for your attention.