Salsa Shark has received the following awards and nominations. Way to go! 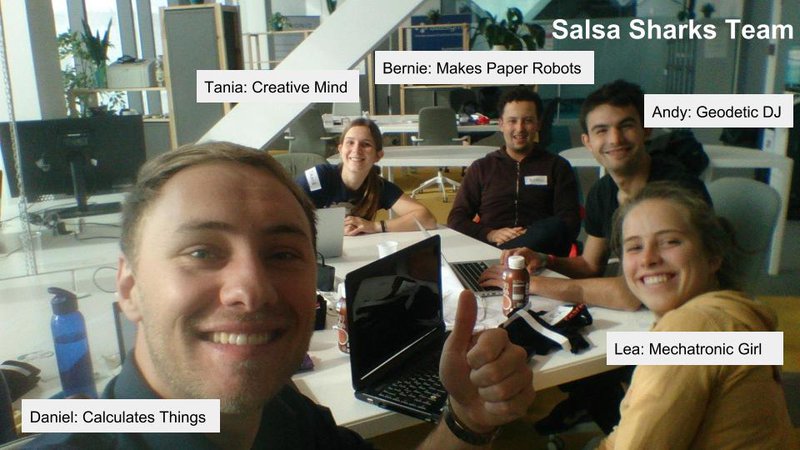 We are Salsa Sharks! We are a team of engineers and present a concept of a gecko/caterpillar-inspired bionic gripper robot for spacecraft inspection.

Our goal was to find a feasible concept for a robot that - when commanded or scheduled - inspects the area assigned on the outside of the spacecraft where it identifies, maps and characterizes damages from Micro-Meteoroid and Orbital Debris (MMOD).

A first approach was to assess different feasible options to inspect a spacecraft for damage from Micro-Meteoroid and Orbital Debris (MMOD).

Team Salsa Shark has come up with the idea of an autonomous bionic robot crawling along the surface of a spacecraft detecting damage. The concept is inspired by nature: the structure and motion of the robot resemble that of a caterpillar, while its grip is inspired by the adhesion of gecko-feet allowing the robot to move freely along the spacecraft ‘s outside surface. See image 1 below:

With every step the robot autonomously inspects a certain area for potential damage. Due to the flexible structure the robot can easily orient the sensors into different positions, while remaining in the same location. This way it can observe a large area before moving further.

The main advantages of our proposal are:

The robot consists of one highly flexible part with multiple joints. At each end a redundant set of sensors are mounted. The idea: while one end of the “leg” holds on to the spacecraft with its adhesive grappers, the other end is able to inspect the spacecraft’s surface.

The flexible structure is built from lightweight materials. After a first rough estimate the robot is expected to have a weight of 3.6 kg divided upon:

To keep the weight at a minimum, no motors are used for the flexible body of the robot. Instead the joints are manufactured from shape-memory alloys (see blue parts in image 1) and the robot is actuated electrically (where an electric current results in Joule heating).

Geckos have specialized hairs on their feet called setae that let them stick to vertical surfaces without falling, whereas their stickiness doesn’t wear off with repeated use. The immense practicality of this ability has inspired us to transfer this technology to our robotic crawler concept. As pictured in image 1, one adhesive pad shall be mounted on each side of the robot’s “leg”.

Tests in microgravity have shown, that robotic gecko-inspired dry adhesive grippers (that are selectively turned on and off) are a viable option for grasping and releasing both flat and curved objects [1]. Furthermore, this technology has also successfully undergone long-duration testing inside the International Space Station (ISS). The adhesives are reusable for thousands of cycles without losing their effectiveness, and do not damage the surface, leave a residue, or produce fibers and particles [2].

The selection of possible sensors for inspection and impact detection have been based upon the instrumentation packages installed on the Orbiter Boom Sensor System (OBSS) used by the Space Shuttle. Following instruments shall be used by the proposed robot:

The robot is designed to operate and inspect the spacecraft autonomously. Human operation shall however be possible if demanded. The robot is battery powered. Therefore, when the battery power becomes low the robot shall autonomously head to a designated charging station on the outside of the spacecraft and resume its work again when fully charges - very much like a lawn mower or vacuum cleaner robot.