Sphere-like drone that orbits around the spacecraft using micro-thrusters and makes use of multiple sensors to detect the damage. Puffer is autonomous, which means it will be deployed automatically when needed and scan the required surfaces for damage. 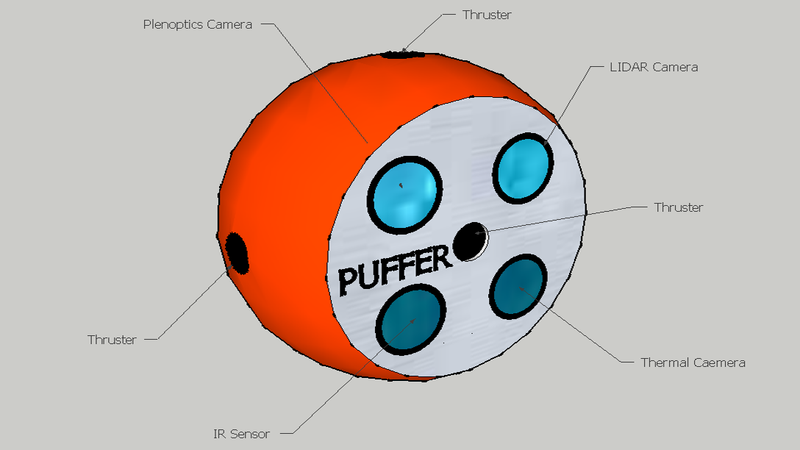 We're trying to find a solution for detecting damage caused by Micro-Meteoroids and Orbital Debris. So ours is to create an autonomous free-flyer to inspect the spacecraft from outside.

I present you "Puffer", inspired by the fish with the same name. It's a sphere-like drone that orbits around the spacecraft using micro-thrusters and makes use of multiple sensors to detect the damage.

We decided to install four different sensors on Puffer:

We designed Puffer to be autonomous, which means it will be deployed automatically when needed, scan the required surfaces for damage and then return to the base station.

Inside Puffer there is a rechargeable battery that powers all the sensors and the propulsion system. Once the battery level reaches 15%, Puffer will automatically return to its docking station for wireless charging.

The way Puffer scans the spacecraft for damage was inspired from nature by the way an eagle tracks its target. First it scans the ground surface from a distance and then gets closer to the location and dives in on its pray when it sees it moving.

The same way, Puffer scans are made in two separate passes, orbiting around the spacecraft:

When a damage is detected, Puffer will use local communication to send an alert message to the spacecraft along with the 3D, thermal and optical images that it took.

We designed the propulsion system to use water as an inexpensive propellant and to be adapted for zero gravity environments. The water is electrolyzed and stored as oxygen and hydrogen which are then used for combustion by the six micro-thrusters.

Puffer needs to have its sensors always facing the spacecraft for the scan to be successful. This is accomplished with the help of an internal gyroscope, which also rotates Puffer along its own axis for taking pictures and moving around the spacecraft.

We hope Puffer will help astronauts avoid unnecessary EVAs which may become dangerous because of the space debris.

Our hopes are that Puffer will also help with damage assessment before atmosphere reentries of Earth bound capsules.

This is our vision of Puffer and maybe some day it will become reality!