Bond, Hydrogen Bond has received the following awards and nominations. Way to go!

Free flyer based on modern scientific technology built to collect and report detailed information of any surface of the spaceship, uses AI system which enables it to be used on many different spaceships. It is a self contained system just like our world. 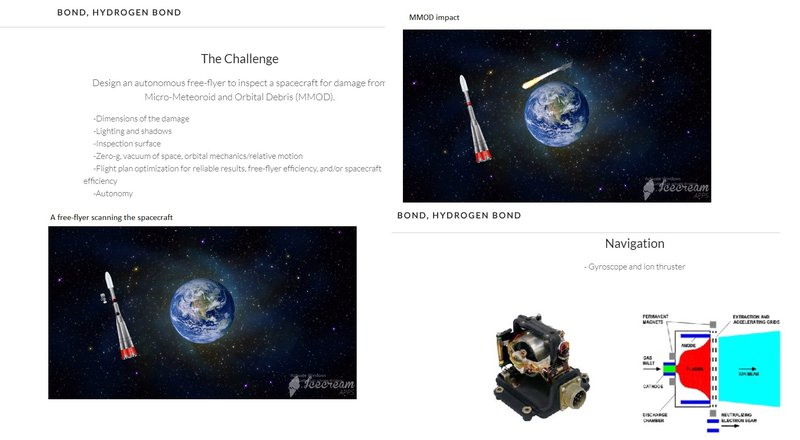 1. The Challenge and/or problem:

Dimensions of the damage

Our idea is to build a free-flyer capable of scanning the whole spaceships surface, detecting the damage done by MMOD, capable to report data to the ship then if needed back to earth for further processing.

From all the options we had, we decided to use what seems to be most efficient system, it uses the most up to date technologies and devices used for navigation and scanning and also it all relies on electricity which can be regained from solar panels mounted on the free-flyer itself or it can be recharged when it docks back in the spaceship.

The navigation of the free-flyer consists of an ion thruster and control moment gyroscopes.By combining both of these devices or systems it is possible to precisely navigate a free-flyer.

Gyroscope:In an isolated system if one part of it starts to rotate one way there has to be some other part of the system that would start rotating the other way to keep the angular momentum same. This is what happens when the parts in a gyroscope rotate. When they rotate, the whole free-flyer goes the other way to compensate, and this is how gyroscope gives the rotary motion required. So by using a gyroscope we can point the free-flyer to the required direction.

This technology already has some uses in the space industry like the International Space Station which has four big gyroscopes used for stabilization of the Station.

Ion Thruster: An ion thruster ionizes propellant by adding or removing electrons to produce ions. Most thrusters ionize propellant by electron bombardment: a high-energy electron collides with a propellant atom, releasing electrons from the propellant atom and resulting in a positively charged ion. The gas produced consists of positive ions and negative electrons in proportions that result in no over-all electric charge. This is called a plasma. Plasma has some of the properties of a gas, but it is affected by electric and magnetic fields.

Even though we could have used only ion thrusters to maneuver the free-flyer, we decided to use both of the systems since it give us accurate navigation but also lowers the cost of the overall navigation system since we use only one ion thruster.

There is also going to be a preset trajectory that the free-flyer will follow to be able to scan the whole spaceship and return back to the spaceship to dock, this makes it a fully automated system but if needed the crew of the ship also has the option to manually control the free-flyer.

The spaceship scanning is going to be done by multiple systems to achieve a correct and precise photogrammetry of the surface and the damage done to it.

On the free-flyer there are going to be mounted 2 types of cameras including a LiDAR system, thermographic or IR camera.By the merging the previously mentioned systems we get an accurate and detailed range of useful data to process like an image which contains 3D images and thermal images of the shuttle, by this we also eliminate the shadow and light reflection problems.

There is also going to be a preset trajectory that the free-flyer will follow to be able to scan the whole spaceship and return back to the spaceship to dock.

LIDAR: It stands for Light Detection and Ranging, is a remote sensing method that uses light in the form of a pulsed laser to measure ranges and generate precise, three-dimensional information about the shape of the object and its surface characteristics, these systems allow scientists and mapping professionals to examine both natural and manmade environments with accuracy, precision, and flexibility.

Except the idea of combining both of these systems we also aim to use AI algorithms used to compare and detect the changes between the 3D images taken before and after the occurrence of the problem which enables it to accurately pinpoint the problem and its characteristics like the shape and size of the damage.

Designed a free flyer capable of collecting and reporting accurate and detailed information on any surface of the spaceship.

The autonomous and AI systems means that the free-flyer is able to be used on many different types of spaceships which also solves part of the cost.

Our approach to this problem is realistic and backed up on current scientific technologies and standards combining it onto one machine that solves all of the troubles of inspecting a MMOD damaged spaceship.

Use the links for more info: